Radhika Apte has shared the trailer of her upcoming movie, A Call to Spy and the first looks of her international movie are intriguing to say the least! Following the lives of women who were placed as inconspicuous spies in France during World War II, the movie tells their story of strength and perseverance. In the film – that’s set for a theatrical release in the US tomorrow (October 2) – Radhika plays the role of Noor Inayat Khan — an Indian-origin British spy sent to Nazi-occupied France during World War 2.

The 2 minute, 30 seconds trailer will have you at the edge-of-the-seat from the beginning and Radhika within that short span of time gives a glimpse of her versatility, as she perfectly captures Noor’s unbreakable spirit and quest for freedom from Nazi atrocities. The actress nails the look too. With a middle-parted bun and a determined, yet kind demeanour, Radhika bears a striking resemblance to Noor. Joining her on her quest is Virginia Hall, played by Sarah Megan Thomas, with a wooden leg and an iron will. They’re recruited by a quick-witted and sharp British Intelligence Officer, played by Stana Katic.

Check out the trailer of A Call To Spy right here: https://youtu.be/TbZgLKjrdnA 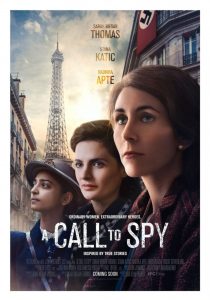 Radhika’s performance as a woman deeply influenced by pacifism caught amidst a violent war with Nazis is a satisfying portrayal of the sacrifices needed to achieve peace. Her chemistry with Sarah Megan Thomas and Castle’s Stana Katic is an ode to the resilient nature of sisterhood in dark times.

Set against a weakening Great Britain with brave spies and powerhouse women, A Call To Spy, directed by Lydia Dean Pilcher seems like a promising watch.

Shaktimaan: Mukesh Khanna reveals plans of a 3-film franchise of his popular superhero