Saad Haroon, creator of Pakistan’s very first English language comedy show ‘The Real News’ and recently titled ‘the Second Funniest Man in the World’, will be seen on stage next to Danish Ali, another well celebrated comic, who also co-wrote the formerly mentioned television political satire. The humorous pair will be joined by none other than Salman Qureshi – a near veteran to Dubai audiences  – as they bring their comedic brilliance together on the eve of Valentine’s Day 2019.

Filmfare ME has an exchange with the trio, prior to their show in Dubai, and catches a glimpse of what really goes on behind the curtains of a Comedian’s mind. And all we can say is – Once you go brown… 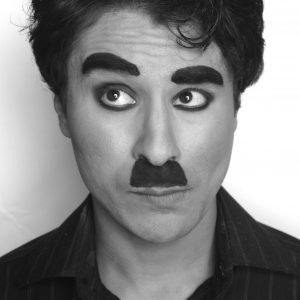 (Haroon) You’ve done some controversial and political segments in your comedic career, specifically in your show – The Real News. Since your segments are quite edgy, what are some things you need to consider before your bit in Dubai?

Whenever I perform internationally, I am always very aware of the fact that I am a guest in that country, and so my stand-up usually does not get controversial to a point that it would be uncomfortable. That being said, I have been coming to Dubai and performing for many years now and the audiences are well educated, savvy, international and not easily offended.

(Haroon) Having done shows around the world, what is your favorite thing about touring and performing in front of newer audiences?

My favorite part is that they do not know what to expect, as most have not seen you perform live. The fewer preconceived ideas they have, the fewer inhibitions they will have and the more you can really let loose!

(Haroon) is there any downside to that?

The only downside is that it spoils you, you wish all your shows were brand new audiences every time.

(Haroon) You recently placed second place in Laugh Factory’s Funniest Person in the World Competition – How did this journey start? Who has been your biggest supporter?

The journey started 15 years ago, when I did my first stand-up set in my front lawn for my little sister’s friends. Many hoops, hurdles and obstacles were overcome before I got to the Laugh Factory competition. My biggest supporter was my mom, the writer in me is her.

(Haroon) Whose recent stand-up comedy you watched and liked?

Ali Wong is just brilliant. Such a fun, funny, fearless voice. I love her work!

(Qureshi) You visit Dubai quite often and have done a couple shows here previously. What do you find unique about the audience in Dubai?

Audiences in Dubai are a real mix, and also well-read. That’s great for comedy because you can explore a number of subjects.

(Qureshi) Your upcoming show in Dubai is a Valentine’s special. What are your thoughts on Valentine’s Day?

My wife is a hopeless romantic so it means I don’t have a choice about what I think about the day – I celebrate it with all the energy I can. Jokes aside, I think as long as we don’t over commercialize it (like all holidays), then it’s a great opportunity to take some time and pay attention to our significant others.

Interesting question. Not sure who I would call Bollywood comedians but I definitely love the comic timing of Govinda in his heyday along with Aamir Khan. There are some Indian stand-up comics that are coming up and I’ve enjoyed watching Rahul Subramanium’s stuff.

(Qureshi) Whose recent stand-up comedy you watched and liked?

of the few that has remained fresh and on top of his game with every special. From the recent stuff I loved JoKoyo’s Netflix special. The guy is great and very relevant especially for Desis even though he is Filipino American. I wasn’t that impressed with Trevor Noah’s new one though.

(Ali) You’ve done comedy for years now, who is your biggest inspiration?

Initially it was Eddy Murphy and the old guard of stand-up comics like Richard Prior, George Carlin and then Mitch Headburg, Jerry Seinfeld. Had the pleasure of seeing Anwar Maqsood and Moin Akhtar live, they were incredible.

(Ali) What kind of audience are you expecting for your upcoming act in Dubai? What do you do the last 30 minutes before going on stage?

I like seeing Desis in the audience and taking them on a journey back to their homeland in a funny way. At the same time it’s always great to see audiences from diverse cultures who are perhaps getting a glimpse into Pakistan for the first time, and we usually have a good laugh. the last 30 minutes before going on stage, I am usually a nervous wreck trying to calm my nerves even after doing this for more than a decade! I guess it helps to keep me on my toes for a better show. I like to remind myself to be extra funny every time as people have taken their time out to see me.

(Ali) what do you have on your Dubai Bucket List? What does the entertainer Danish Ali find entertaining in the city?

I’m still very new to Dubai and have not traveled here too often, so i would love to find a friend or two to show me what it’s like to live in Dubai, as opposed to being a tourist in Dubai. The fancy hotels are nice, but after a while, you just want to see what it’s like to actually live here. Looking forward to finding small local eateries and a walk downtown. Of course we are still shopping LOL and vacationing in R.A.K. later.

I’ll be honest, I don’t follow Bollywood too much, but my wife loves it. I am a huge fan of AIB though, from India. I’d have to say my favorite actor is Amitabh Bachchan because of that really funny scene in “Namak Haram“. That entire song with him trying to get his shoe back from the running water was really funny. That movie is awesome.

(Ali) Whose recent stand-up comedy you watched and liked?

As a professional, I try not to watch other comedians now, as it might influence me and I enjoy having a very unique brand of humor. I want people to watch my videos, and catch me live and say, “Wow, that was really original!”. I will say though that I love Larry David from Curb Your Enthusiasm, and I still catch a glimpse of Trevor Noah from the Daily Show on my Facebook feed 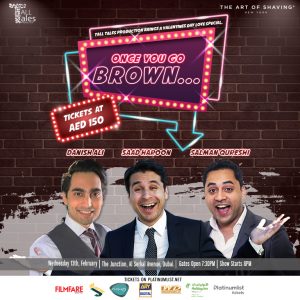 Once You Go Brown kicks off at The Junction, Alkserkal Avenue on Wednesday, 13th February, 2019 at 7:30pm.

Vidya Balan all set for her Tamil debut!

Tanushree Dutta invited to speak at Harvard on the #metoo movement!