The Dubai Aquarium & Underwater Zoo Gentoo penguins come from a facility in the USA. However, they can be found in their natural habitat around the Antarctic Peninsula and surrounding Subantarctic islands. The purpose-built temperature controlled exhibit “Penguin Cove” simulates the natural Sub Antarctican environment of the Gentoo Penguins with a controlled air temperature between 2 and 4 degrees Celsius and a water temperature between 5 and 7 degrees Celsius. Additionally, a special system was also created to mimic their annual lighting cycle in the southern hemisphere. The exhibit is multi-levelled and has lots of exciting areas for the penguins to climb on and explore, including a slide into the pool.

In 2010, Dubai Aquarium & Underwater Zoo was the first facility in the region to introduce Gentoo penguins. The flightless charismatic birds are brought back today through an ultra-modern exhibit and an encounter that will enhance the visitors experience like no other, thus setting a new benchmark.

A visit to the “Penguin Cove” will be part of the Aqua Nursery, Explorer package and VIP Experiences tickets as a first step until the launch of the “Penguin Encounter” by early August. The all-new immersive encounter allows guests to step inside the Penguin Cove habitat and go face-to-feather with the colony of live Gentoo penguins while learning about their fascinating natural behaviours.

Gentoo penguins are social animals known for living in colonies and often mating for life. The birds’ natural curiosity and unique behaviour make them a natural crowd-pleaser. While the flightless birds aren’t nimble on land, their wings serve as fins allowing them to glide gracefully underwater, reaching depths of more than 200 m and speeds of 36 km/h, faster than any other diving bird. They can reach diving depths of up to 200 m when hunting for small fish, krill and squid. They can also remain underwater for up to seven minutes.

One of 18 penguin species on Earth, Gentoos can grow to be 90 cm tall and weigh about 6 kg. Featuring pink colouration under their wings, they are commonly cited as among the most charismatic of penguins.

Dubai Aquarium & Underwater Zoo is one of the largest and most diverse aquariums in the world, featuring over 33,000 aquatic animals, the world’s largest acrylic viewing panel, and a ten-million-litre tank (the largest suspended aquarium tank in the world). New species are regularly added with recent additions being the exquisite Sawfish and Sandbar sharks

A 270-degree walk-through tunnel experience, Glass Bottom Boat Rides, Shark Dives, Cage Snorkeling Experience, The Ocean School Programme and the Aquarist Programme are amongst some of the activities that offers an interactive experience for visitors to Dubai Aquarium & Underwater Zoo.

*The “Penguin Cove” visit is currently part of the standard ticket packages starting at AED 120 per person. Visit thedubaiaquarium.com for tickets and more information. 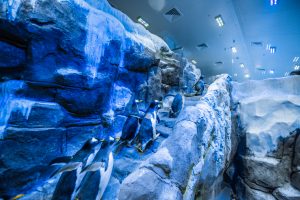 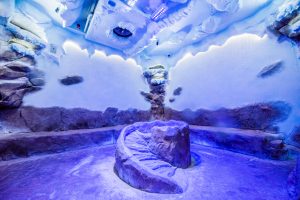 Sameera Reddy keeps it real as she redefines beautiful!