Taher Shabbir to play Pratyush Parashar in the film!
After releasing two character posters featuring Vivek Anand Oberoi as Prabhu Singh and Rajeev Sen as Rohit Vardhan, Mandiraa Entertainment and Oberoi Mega Entertainment the makers of ITI – Can You Solve Your Own Murder, reveal their third character in the film through a new poster. Taher Shabbir, who got critical acclaim for his roles in Guilty and Naam Shabana, features on the poster as Pratyush Parashar.

The film’s tagline, Can You Solve Your Own Murder forms a never-heard-before premise in the film. The first collaboration between Mandiraa Entertainment and Vivek Anand Oberoi’s Oberoi Mega Entertainment, this sleek whodunit thriller is written and directed by Vishal Mishra and creatively backed by Prerna V Arora. Legend Rajesh Roshan would be composing music for the film.

Here’s the character poster, teasing us with his character in the film. 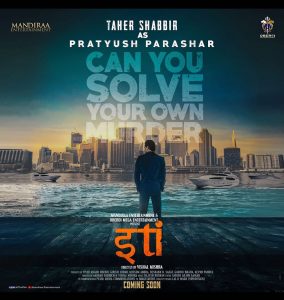 Talking about the casting of Taher, director Vishal Mishra said, “Taher Shabbir was our first choice for this role. I’ve seen his work in Fan, Manikarnika, Naam Shabana and Guilty and have always took notice of his performance. He’s a perfect fit to play Pratyush Parashar, the character that’s got many layers.”

Vivek Anand Oberoi elaborated, “Right casting is very important these days, since actors evoke the dynamics that evolve in the film. This film, being a mystery, requires actors who can bring not only their own craft to their layered characterisation but also surprise you with their performances. Taher is one such actor and he fits Pratyush’s role perfectly.”

Taher Shabbir said, “Being part of a mystery thriller has always been one of my dreams. I’m so glad that this early in my career, I get to play such an interesting character in a concept-driven, unique thriller. For this, I’m grateful to Mandiraa Entertainment, Vivek Anand Oberoi, Prerna V Arora, Oberoi Mega Entertainment, and Vishal Mishraji. Being a part of this talented team makes this opportunity all the more special and I’m sure this movie is going to be a game-changer!”

The film revolves around a woman who is racing against time to solve her own murder. Intricately woven, it has an ensemble of characters intertwined in their own struggles. It is expected to go on floors this year and release early next year. ITI is presented by Mandiraa Entertainment and Oberoi Mega Entertainment, and produced by Vivek Anand Oberoi, Girish Johar, Kussum Arora, Reshabh D Saraf, Keyur Pandya and Sanjeet S. Yermal.

Atrangi Re: Akshay Kumar, Dhanush, Sara Ali Khan to start next schedule in 3 cities from October