Bollywood star Suniel Shetty is making his Telugu debut with Manchu Vishnu’s Mosagallu that releases in theatres on March 19. The actor plays a bad-ass cop in the film that deals with a 2,600 crore scam. The multilingual film is being directed by Hollywood director Jeffrey Gee Chin. The grand pre-release event of the film took place in Hyderabad recently and the event was a huge success.

Speaking at the event, Suniel Shetty said, “I always admire Mohanbabu as an actor and friend. When this offer came my way, It’s an honor to work with the family. My food every afternoon came from their house. Even today I get Fish curry to Mumbai from their house. Thanks for the hospitality. This is a subject close to my heart and everyone’s heart. Mosagallu was initially planned in English and Telugu. One day, Vishnu decided to make it in all languages. I hope it works for the team and for the industry’s survival.” 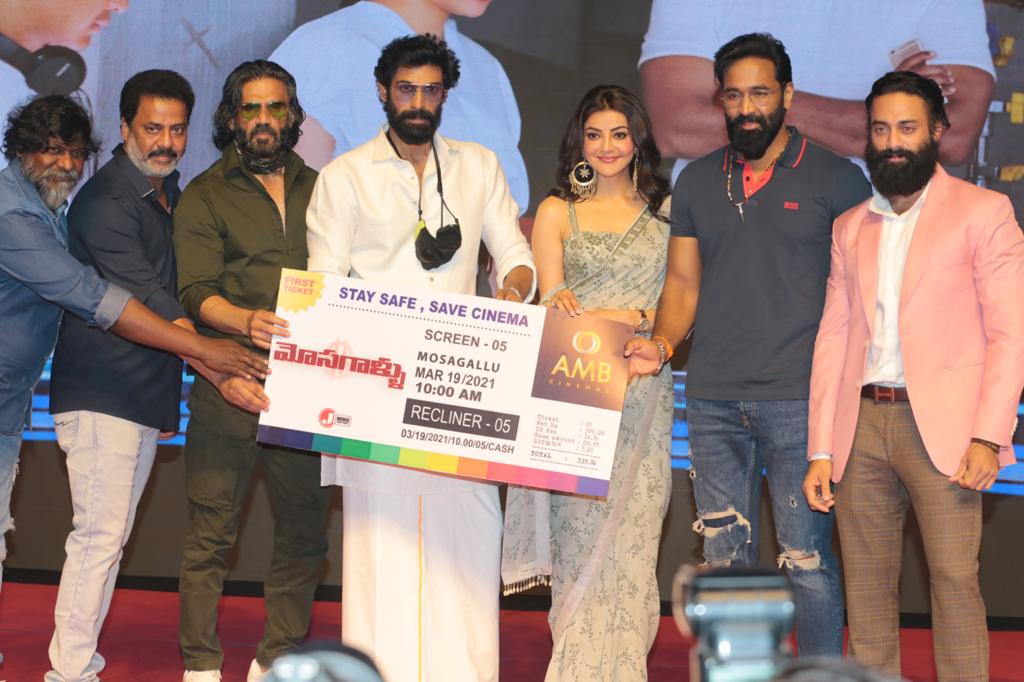 South star Rana Daggubati, who attended the event as a guest said, “I am closer to Mohanbabu than Vishnu. Suniel Shetty is a childhood inspiration. I started going to the gym since my eighth standard after watching his Mohra. Wishing all the best to the entire team.”

Kajal Aggarwal added, “Mosagallu is my first theatrical release after marriage. I am really excited and nervous about the film. It’s been one year since I watched a film in a theater. We all worked really hard for the film and underwent stressed times in the pandemic. On this 19th, I request you to watch the film in theaters and bless us.”

Mohanbabu said, “This is an excellent story about a never before scam in India. Those who have knowledge of computers should watch it. Vishnu researched one year for the film with the help of some police officers in Mumbai. There is a reason for the scam and there is an emotional angle as well.”

Vishnu said, “I thank Suniel Shetty for accepting the film immediately. I cherish every moment of working with her. Special thanks to Kajal for playing sister despite being a mainstream heroine. I thank the entire cast and crew. When I sent our version to the American team, they added some of our scenes into their version, it indicates our talent.”

The Bachchans wish Shweta on her 47th birthday!