Saudi Arabian film maker Haifaa Al Mansour speaks to Manju Ramanan on her next film ‘The Perfect Candidate,’ based on the life of a lady doctor in Saudi Arabia. The film is now available on the OSN Store

Is the story inspired by a real-life doctor?

In a way the film is inspired by my youngest sister, who is a doctor. A lot of the character’s personality comes from her, and a lot of Sara’s personality comes from one of my other sisters who is much more street smart. But for this film I really wanted to tell a story about a culturally conservative, traditional woman who provides a critical service to the community and just wants to do her job well. When she identifies an issue that is stopping her from performing her duties she decides to embrace the changes that are taking place and go out there and seize the moment to make her situation better. The reality of her journey is that it will be difficult, and lots of people will be critical of her choices, but it will ultimately open up a whole new world for her. So while it is easy to justify a doctor needing to make her workplace function in the most efficient way possible, it is ultimately a journey that all women in the country need to go through to different degrees. I want to stress to the women of Saudi Arabia how important it is to go out there and take a chance, even if you don’t have any experience in doing so.  It is still hard for Saudi women to put themselves out there, and they are nervous about doing things they haven’t done before.

How important is it for you to narrate the story from a woman’s point of view?

Well, most of my work focuses on female protagonists who want to work hard and do their job to the best of their abilities. And again, because of the changes so dramatically affecting women in the Kingdom at this time, I wanted to create a character that is very much representative of the mainstream mentality of Saudi women. She covers her face and follows the cultural norms of the society, but ends up pushing boundaries because she wants to do her job well. The restrictions that keep her from performing her work in the ways that would best benefit the society frustrate her and force her to think outside the box. She is not a rebel for the sake of rebellion, she is someone that knows that her work can make the country a better place and simply wants to remove the barriers that keep her from accomplishing her mission. I believe strongly that this is the way that true change comes to a society, through hard-working people who simply want to be able to reach their highest potential.

How do male characters in the film contribute to woman’s success?

The male characters have their own journeys in the film, but by recognising that they are all going through similar challenges they end up contributing to each other’s successes together. Maryam’s journey is very much about understanding her father’s struggle as an artist. I feel very close to his character because I have so much respect for the musicians and artists who persevered throughout the long period, we lived through in which artists were vilified and prevented from performing in public. They didn’t have many opportunities to make a living off of their art, they did it for the love of the medium. So, I think it is very important now that we celebrate the artists who kept our creative traditions alive and understand the sacrifices they made to contribute to our cultural progression.

Tell us about the importance of sisterhood and how it helps the main character achieve her goal?

Sisterhood is a very important theme of the story. The girls depend so much on each other, and their destinies are so crucially intertwined, that they have to learn to understand and support each other if they all want to succeed. The actions of one affect the lives of all of them, whether they like it or not, so being open to the consequences of one of them stepping out of line is a tough decision to make.

Ambition in a woman is not considered a virtue by many. How does the film deal with it?

It’s true that ambition for women is not always regarded as positively as it is for men.  But the ambitions of the characters in this film are representative more of the collective ambitions of the society, and the changes that all citizens need to embrace to move it forward. All of the recent breakthroughs that have come for women in Saudi Arabia are huge, seismic shifts for the region. That is why I chose to start the film with the main character driving a car. It is something that would have seemed impossible even a few years ago. But now it is up to women to accept these changes in their own lives and take the risks that come with trying something new. The pressure is no longer on progressive women, who have pushed for these changes, it is now on the middle-of-the-road people, who are reluctant to embrace change. I hope more women will start driving, and working in mixed environments with men, or travelling, or just doing the things that make them happy.

How was the film received by the Arab and the non- Arab audiences?

And just like my first film ‘Wadjda,’ I heard from a lot of foreign audiences that were surprised by how strong and sassy Saudi women actually are. There is this perception that we are weak and shy and afraid of the world, and that we are just victims resigned to the limited, restrictive circumstances of our culture. So many people are really surprised to see how full of life we are. Saudi women are so tough, feisty, funny and way savvier than most people realise. I hope this film further captures the fire and bravery of women from my country. Telling their stories is the honor and privilege of my life.

I am very excited to show the film exclusively on OSN, and hope it triggers a discussion about the best ways to promote change within a society. There are some who believe that radical, violent upheaval is the only way to bring about revolutionary changes to a culture. I believe that real change comes from small, incremental changes that build a foundation for art and cultural openings to emerge through hard work and dedication.  As I see people digging into their positions becoming less tolerant of others all around the world, I think it is a very important discussion to have at this time. 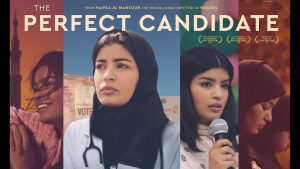 Saudi Arabia to send its first female astronaut to Space