When it was announced that the trailer of actor R Madhavan’s directorial debut Rocketry would be released on April 1, it was thought that this could be an April Fool’s Day prank. But writer, director and co producer of `Rocketry, Madhavan and team had a very special reason for releasing the trailer on April Fool’s Day.

He wrote on social media , “It has been five years since I started this journey. As time passed each of you joined me in this journey and made this journey a part of yours. When we began the odds were completely stacked against us. However, every obstacle was tuned into an opportunity. An opportunity to make something better than what would have otherwise deemed ordinary. We moved step by step, shoulder to shoulder, and soon the journey became an extra-ordinary one. Now, as we release the trailer of our labor of love, we are moving into the last mile of this incredible experience of bringing an untold story to life. To all of you, I thank you from the bottom of my heart.”
He added, “More than a film, this is a tribute to the extra-ordinary unsung heroes of the country who do everything they can for their love for the country, their passion, and belief in what they undertake without expecting anything in return. These are the people who should be celebrated for their contribution to society. They strive, persevere, accomplish more with less, without complaining, without wailing for attention… And sometimes when such a man or woman is wronged, the entire nation is wronged.”In a heartfelt letter to his team, Madhavan thanked them for being part of the journey, and explained why the trailer was releasing on Fool’s Day. 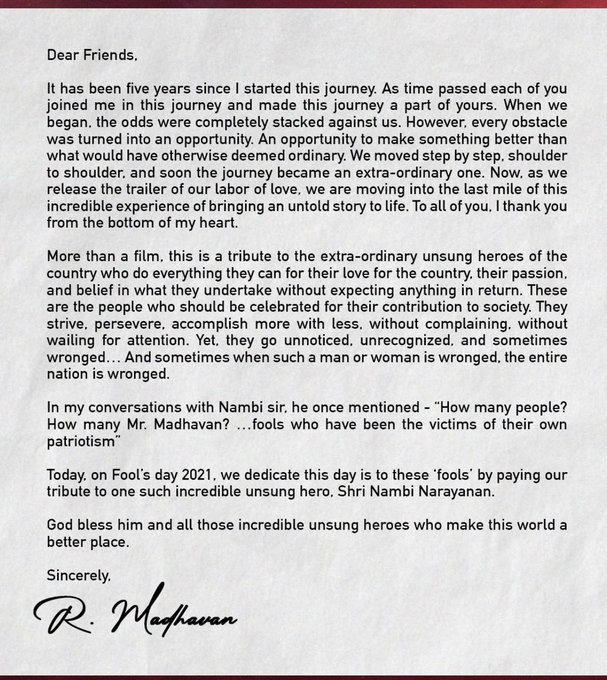 He recalled a conversation he had with Nambi Narayanan on whom the film is based. During the making of the movie, he revealed the reason for releasing the trailer on April 1. “In my conversations with Nambi sir, he once mentioned – “How many people? How many Mr. Madhavan? …fools who have been the victims if their own patriotism” Today, on Fool’s day 2021, we dedicate this day to these ‘fools’ by paying our tribute to one such incredible unsung hero, Shri Nambi Narayanan. God bless him and all those incredible unsung heroes who make this world a better place,” wrote Madhavan and signed off.
Previous Article