All Things Filmy, Bollywood, Entertainment, Features, Filmy
1 month ago
by Manju Ramanan
0
Celebrating the 75th Year of Indian Independence, Vishnu Vardhan Induri of Vibri Motion Pictures, the producer of highly anticipated films “83” and Thalaivi, announced a feature film Franchise titled Azad Hind, as a tribute to the Unsung Heroes of Indian Independence Fight who are lost in history. 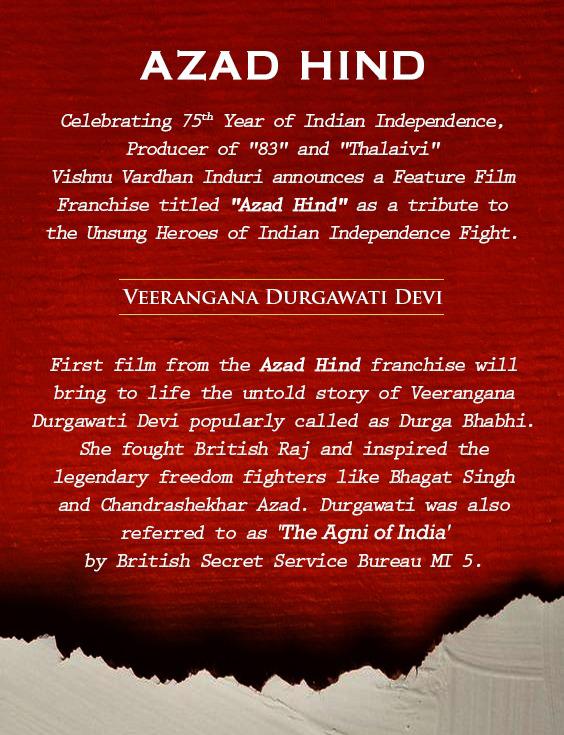 Launching the franchise by celebrating the heroics of a woman, the first film will bring to life the untold story of Veerangana, Durgawati Devi, popularly known as Durga Bhabhi. Exhibiting courage, valour and strength, she fought British Raj,  inspiring the legendary freedom fighters like Bhagat Singh and Chandrasekhar Azad. Durgawati was also referred to as The Agni Of India by British Secret Service Bureau MI 5. Unlike other freedom fighters, after Indian independence, Durgawati started living as a common citizen in quiet anonymity and exclusion in Ghaziabad. She started a school for poor children in Lucknow. Durgawati Devi died in Ghaziabad on 15 October 1999 at the age of 92.
To play the power-packed character, the makers are currently looking at roping in one of the leading ladies of the nation. With other details including the name of the director under wraps currently, the film franchise paying a homage to the brave fighters of Indian Freedom struggle is the apt announcement on Independence Day, creating anticipation amongst the audience.
Previous Article

Bollywood War movies to look forward to, this season