Waluscha De Sousa, who made her digital debut as Garima Kalra in the Voot series Crackdown is thrilled for her first series. Waluscha, who has been a model previously, sees becoming an actor as a natural and perhaps a likely transition these days. Waluscha talks to Deblina Munshi about Crackdown, and her love for action. As a newcomer, she doesn’t want to limit herself, but wants to do more!

How did Crackdown happen?

Well, I heard about Apoorva Lakhia starting this project and I heard about the fact that it was in the genre of action. So, I approached him through my casting director Mukesh Chhabra, sent in my tapes because I really wanted to show that I had in me what it takes to play this character Garima Kalra. It has been very unusual because it’s very removed and different from who I am as a person entirely. Garima has a lot of layers within her. She’s black, she’s white, she’s grey. She’s all over the place. As an actor, it gives a lot in terms of performance and it is a genre that I have never explored before, something that I have always wanted to do…action. And who better to do it with than Apoorva Lakhia? It is something he does well and is very comfortable with. He’s done some great work in this genre. So, for me it ticked all the boxes, it was exciting, challenging, new. It was also physically very challenging. We had to train for two whole months as far as action is concerned. It was a fun process with lots of aches and pain. I had a ligament tear but all in all, when I look back, it was an amazing experience.

How are you and Garima Kalra different from each other?

Well, I wish I could speak more about the character. All I can say is, she’s a mother, she’s a wife and she’s a badass. You’re gonna have to watch the series. I’m very thrilled and excited about this. Lots of hard work and passion put into it, I’m just really happy with the way Garima Kalra’s character has developed.

What made you go from modelling to acting?
I think modelling was a stepping stone and it is a natural transition for many of us. Modelling happened to me when I was very young but acting has always been my passion. I mean there are so many girls who have made it from the ramp into acting. It’s just become one of those things you know. 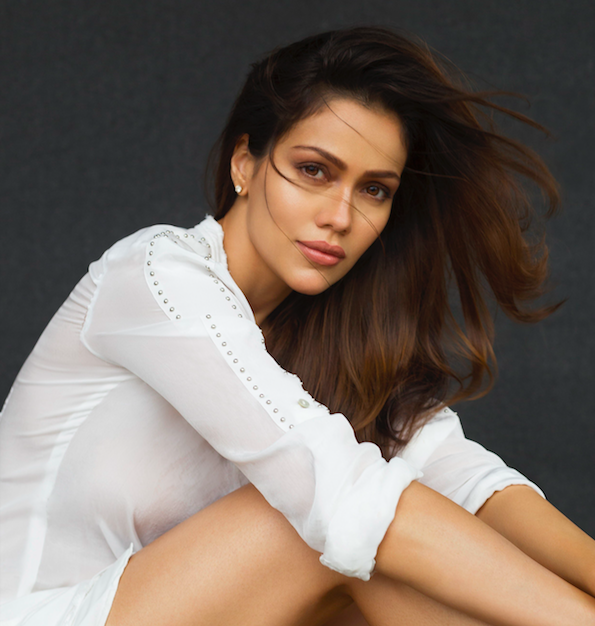 What does the process of transitioning from Waluscha to a character entail?
I think I’m very much a director’s actor. I sit with the director, we discuss how the character would think and react. I just imbibe what the director’s vision is and that’s how I go from there. If it is very close to the person I am, then of course I can give my inputs as to how I would probably react generally in life. But for example, Garima Kalra, has layers that may be close to my personality, but for the most part, it is very very removed from who I am.
Apoorva Lakhia helps dissect the character for us in such a way that by the time you’re on set, you’re Garima Kalra already. Once that process is done, the rest just falls into place.

How was your rapport with your costars?
I had a blast shooting for this. I think the whole cast and crew were just down-to-earth, fun-loving people and Apoo as well. He loves cracking a lot of jokes,  he loves pulling people’s legs, so all in all it was a lot of fun. It was very positive. He(Apoorva Lakhia) was very encouraging to everyone. He had a unique way of praising as well as telling us when the shot had to be retaken. He was very hospitable, he looks after his actors really well. He demands that you be fully present in that moment and he is a taskmaster, but why not?

What made you choose Garima Kalra as your digital debut character?

First of all, I think that OTT does not stereotype you. I think that’s a great thing. I’m doing work besides this on OTT and each one is very different from the other. So, I think that notion that it’ll stereotype me is not in my head at all when I’m choosing a role. Since, the character is much unlike me, possibly people wouldn’t associate me with a character such as Garima Kalra. Though it was a challenge for me to prove myself, so I could explore. Again, action is a genre that I’ve never done before, so it was just a great way to say “Hey! This me. This is what I do.”

What kind of roles do you see yourself playing in the future?
I don’t want to limit myself to anything. But, while training for action, shooting, I came to realise that action is something that I love doing. It’s very thrilling. I get a rush, I get a high from it, so I’m hoping to do a lot more as far as action is concerned. I just want to do some work, some good work, and some challenging work.

This is why New York City is called the Big Apple