Superstar Mahesh Babu was in Dubai recently for the second schedule of his upcoming film, Sarkaru Vaari Paata. Written and directed by Parasuram, the film stars Keerthy Suresh in the female lead role. Jointly produced by Mythri Movie Makers, 14 Reels Plus and G. Mahesh Babu Entertainment, the film stars Mahesh Babu and Keerthy Suresh. The music is scored by S. Thaman, with cinematography performed by R. Madhi and editing done by Marthand K. Venkatesh. Principal photography of the film was commenced on 25 January 2021.The film is scheduled to be released theatrically in January 2022 coinciding with Sankranti.

Mahesh Babu will reportedly be seen in a never before avatar in Sarkaru Vaari Paata.  The Telugu superstar recently shared a photo of himself working out in the gym. 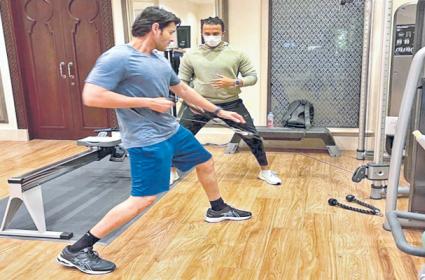 His personal trainer Minash Gabriel, who is training him for the film, revealed, “Barring the day we landed in Dubai , I’ve been at the gym every single day training MB post his shoot.” He also added how Mahesh Babu has come a long way and has left no stone unturned to get into the skin of his character. He added, “From battling and overcoming injuries to getting into such incredible shape and conditioning is a testimony to his work ethic and perseverance. I can safely say that this man is ageing backwards and is only getting better with time.”

Vivek Oberoi is fined by Mumbai police over V-Day video