An average conversation with Maniesh Paul will certainly make you smile, laugh and then laugh some more. Endowed with a whacky sense of humor that he picks up from instances around, he is a true entertainer – never offensive, but filled with good-hearted mischief and wit. Here’s Maniesh in a candid conversation with Manju Ramanan

So, what? I have to keep going. I make jokes out of them too. One of my recent films had two tickets sold for the show, we went to check and I insisted to stay because we would add up numbers too (laughs). I have heard things like tera kuch nahi hoga bhai – but you have to take it in your stride. I will keep trying always. People will demean you or uplift you and you have to keep your ground. You have to fall and rise. I feel happy and blessed that I have my wife and family around me. She has played her part and kept me sane.

I am the kind who cannot be sitting for things to happen to me. It is a blessing when the internet is doing well and we should thank God. I like singing and my friend Raghav Sachar and I decided to record a song together. I recorded it on phone and he mixed it and I shot the video too. My daughter learns the piano and I started learning too. Then the film came up as an idea because I saw so many Instalives that I was inspired to create something on those lines. I am writing a lot of poetry and have written 50-60 poems. I write in Hindi and generally gather my thoughts and put them up on my Instagram. Also, I love reading – Al Pacino’s blog, Mario Puzo’s The Family, Illusions by Richard Bach.

My wife and I handle both our kids during the lockdown by keeping them engaged at home. We play board games such as Ludo and Scrabble so that they remember that there is life beyond technology. Not everything is an app. We have kept our kids in a regular space – the celeb life is a bubble and we like to keep it normal. I don’t let them feel that I work in the film industry. My wife is happy to travel by economy and these are simple small things that we want to teach our kids.

I collect shoes and I own 250 pairs of them. I started buying only when I could afford them. I shop from the US about 18-20 pairs in every colour. I own a pink leather pair that is pretty unusual and pink leather shoes as well.

Life’s a Song too

Vishal Dadlani keeps prodding me to sing. I won a scholarship for singing in college. Since I was never interested in studies, I struck a deal with my principal that I will win prizes for the college and he in turn could waive off my poor attendance in Travel and Tourism. My dad is a Chartered Accountant and he wanted me to graduate. I graduated only because I wanted to marry Sanjukta.  I would study only for the last 8-10 days and I would buy notes from the topper, photocopy them. One register would cost Rs 50, so it was Rs 150 for three registers.  Since I am an auditory learner, my wife Sanjukta would read it out to me and I would remember them. In the same way my dialogues are read out to me and I just pick up points. I don’t need a teleprompter at all. My daughter is like that too. If I hummed a tune while passing by her, as a baby she would be humming the same tune. My son remembers landmarks while we are out travelling.

For me humour is around us always and has saved me. And I am not super-sensitive. If I get hurt, I move on and don’t keep grudges.  At one point, some actors would be hesitant to share the stage with me and today those actors are my friends. Work so hard that they can’t ignore you.  Also, I prefer to choose happiness over hurt. If I am angry, I go into my room, cool down and calm my anger down. My family leaves me alone if I am angry.  I have noticed that if you are angry, you tend to speak a lot and then kamaan se nikla teer wapas nahi jata. What you say in anger will always be remembered. The hurt will always stay. Onstage too I am careful that I don’t say anything that will make the guest’s families feel bad. I leave it on a high always and never hurt below the belt.

Somehow, people feel that I will walk through the star’s entourage and handle it. That I will be funny. I am glad that I helped create this. But I have been incredibly blessed. In 2013, I was hosting an award nights and Salman Khan suddenly got up in the middle and said “C’mon Manish”. On his way back, at the red carpet, he mentioned that I am the best host in the universe. After that I hiked my fees! (Laughs). He then invited me to his Eid party and met me very nicely. He then later told me, “Aap bhi Chalo Dabbang tour par”. It was a huge opportunity. I had mentioned to him about an earlier award ceremony that I was hosting and had asked the organizers to give me a good entry and they had declined. And now, Salman Khan was telling me that I would enter with 45 dancers onstage. “Apna show hai na,” he said. He gave that space and he also told me to dance with him during his performance. He respects me and I reciprocate with love and respect.

Brush with Big B

I am a die-hard fan of Bachchan saab. I have a poster of him in my room and even have a 786 ka billa. At one awards night, I called him from the stage saying, “Gale lagna toh banta hai.” He gave me a still look and then I walked up to him to hug him and he hugged me back warmly. After that, I asked him “Kaisa laga mujhe gale lagaake?” When he was hosting KBC, my parents were visiting me and I took my mom to meet him. She told him to always keep blessing me, “Aap apna haath iske sir par rakhna,” she said.  And he said, “Hum toh inse seekhte hain.” After he left, my mother tells me, “Dekha mai bolti thi, he copies you.” (Laughs). Such an innocent line from my mom. 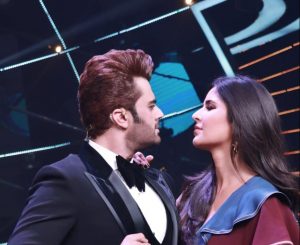 Akshay Kumar is a huge prankster and a big one at that. During Jhalak Dikhhla Jaa, I blushed in front of Madhuri Dixit and when I had to dance with her, kept dancing far away from her. She hugged me though I was so shy. Jacqueline and I are the mad team in Dabbang tour – we go mad onstage. Katrina Kaif, during the tour, challenged me that you will not come onstage when I am dancing and when ‘Afghan jalebi’ played, I joined her. We had a great time.

As a host and presenter, there are many instances where your presence of mind saves your day. That I can work without a teleprompter being the foremost. Once during the Mumbai police show, every star comes for 15-20 minutes and when my name was announced, a big star arrived, On the spot, I made sure that I welcomed the star and saved the day. Once the teleprompter wasn’t there and I had to improvise the show. The entire show.

Though I am in a light-hearted space, I am ready for intense roles and I want to experiment now. I have shared an OTT film poster that has been offered to me. I now want to explore.

Salman Khan to return as ‘Tiger’ with Kabir Khan as director?