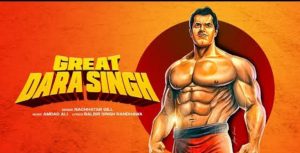 The song celebrates the life of the great wrestler and his screen roles. Listing out five of his father’s best roles, Vindu shares:

Mard was just awesome the way Manmohan Desai ji showed him stopping a plane and I remember the whole theatre erupted into claps!

Jagga Daku was a Punjabi film that won him many awards and that is when, as kids, we realised that our father can die in a movie, but live on in real life.

Kisan aur Bhagwan saw him enact his role with such simplicity that just made everyone fall in love with the character.

Jai Bajrangbali is when Dad enacted Hanuman ji for the first time in that film and since then everyone feels if anyone can ever be playing Hanuman ji it will have to be exactly the way Dara ji did it.

Lutera, the old movie was amazing and had ships and pirates like never seen before and so it is etched in my memory.

BELT IT OUT THE JENNIFER ANISTON WAY