Actress Nushrat Bharucha who has worked with Kartik Aaryan in majority of her early films recently got into a cute banter with the actor on Instagram and it will make you laugh out loud.

It so happened, that when a photographer shared throwback pictures of the two actors, making fun of how he looked back then, Kartik asked Nushrat who was that chomu hero with her and joining in the fun, Nushrat too went to call herself Miss Fancy Dress Competition. Well, while these surely gave us all a good laugh, they have always shared a great chemistry on the big screen. 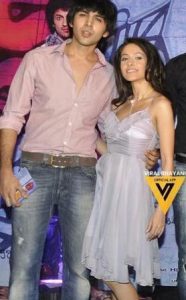 Kartik and Nushrat have worked together in films like Pyaar Ka Punchnama, Pyaar Ka Punchnama 2, Akaash Vani and Sonu Ke Titu Ki Sweety. While their last film went on to be a Rs 100 crore grosser, now, both Nushrat and Kartik are doing extremely well in their respective careers, in fact, their films have been ruling the box office.

While Kartik has delivered a series of hit, Nushrat’s last, Dream Girl, also went on to be a blockbuster. And like always, Nushrat will be working with the finest of actors in her upcoming films, she will be sharing screen space with Rajkummar Rao after 10 years in Chalaang and will also be seen as the leading lady in Hurdang.