Sayani Gupta actress of Article 15,  Hungry, Margarita with a Straw, Jagga Jasoos, Baar Baar Dekho, etc, is gearing up for Season 2 of ‘Four More Shots Please,’ on Amazon Prime. In this EXCLUSIVE interview, she talks about what she is doing during the self-isolation time, upcoming projects and much more.

How are you coping up indoors during the corona scare ?
This is not normal at all for me. But since I hardly get a break and am constantly working on several projects at one time, I am really loving this time. I don’t get this space with myself and there is no deadline etc, so I am loving it. Soon the promotions for Four More Shots Please will start but this time due to the corona crisis, we will be largely online. I love music and like to dance and after a long time I have the time to work on myself and nurture my other interests. I have started painting and sketching too and I do my riyaaz everyday as well as meditation. Right know life itself has become a big pause button for each of us to restore ourselves. It feels like a tip of an iceberg and that we will soon face an apocalypse. As for crowds in Mumbai, I live on the main road and it is bizarre to see the streets empty. Even after 26/11, Mumbai’s local trains didn’t shut. For a city that never sleeps, it, coming to a standstill is unusual. I am also taking this time to catch up with friends and family across the world.

Most things I love cooking are Bengali dishes – fish, mutton and prawns but I am trying to be vegetarian for some time.

Four More Shots Please had a fabulous first season. How do you see Season 2?
Bigger and better for sure. The scale is bigger this time. We have also shot at two outdoor locations that I cannot mention now. The last season’s feedback was that the show was surface level, this season we are going deeper.  There is a lot of focus on interpersonal relationships. The characters had a fall out last season, but that is normal to any friendship. This season they are pepping each other up. There’s more drama for sure and my character Damini is anyway very dramatic. She gets a lot of attention and she does things not out of malice but out of constant turmoil.

Did you girls bond offscreen?

Initially we did have our ups and downs since we have constantly been on each other’s faces over the years but it is three years now and we have grown to respect and understand one another. We have hit the balance and come full circle. It is a beautiful emotion. I can say this on behalf of all four of us- we have a nicer equilibrium now. Also, the crew is all women including the producer and director. Our sound recordist is a man and so is the production designer and some light men– most others are women. The decibel levels are high and our sound recordist keeps telling us to lower our pitch ( laughs).

Do you see OTT platforms as a great showcase of talent across genres?
Yes, the web series platforms have changed the hierarchy that a show can be led only by stars. It is true of not just actors but technicians as well. If you are a good film-maker but don’t have a huge body of work to show, you can be recognized through this platform. You might not be a star but you can be a lead in the show and your face can go up on hoardings and people will recognize your talent. It is also a good opportunity for writers to make their mark. Right now Amazon has 14 major shows and some of the makers are but a film old.

Are you getting meatier roles in films after your web serials?
I’ve done over 25 films but people remember my web series than the films because the content is consumed at home largely and your character becomes a household name.  In Sri Lanka people called me Kaushiki ( Kaushiki on Viu), in Georgia and Nepal, they called me Rohini (Inside Edge-Amazon Prime). There is a recognition factor in terms of audiences. In terms of work, the bigger players know me since my shows have been successful. Work has always come by but I am very choosy. I find it easier to say no than say yes. I am concerned about what the character is doing. I said not to Kabir Singh and couldn’t watch Arjun Reddy because it doesn’t bode with my sensibility. I like the British series The Good Karma Hospital that is a six episode series where I play an acid attack warrior. I want to explore and I want to be challenged. I don’t want to sleep walk into a film because the money is good. When I did Article 15, I told Anubhav sir that I will come and assist you. I just wanted to be part of the film. Then he told me he wanted me to play Gaura.

What are your forthcoming projects?
I am looking forward to Axone, a bittersweet satire that follows immigrants in Delhi who are attempting to organise a wedding party, but soon everything goes wrong. I play a 23-year-old Nepali girl from Manipur.  The film is written and directed by Nicholas Kharkongor,. I have also co-produced ‘Where the Wind Blows’, directed by Karma Takapa, whose films Ralang Road and Mor Mann Ke Bharam have travelled to various festivals. And there are two more that I cannot discuss now.

Has web series content led the way to up content in Bollywood cinema too?
No one works in isolation today. Even if you do not make a conscious comparison, it is true that the content on films are better. In today’s times, Ayushmann started this thing about content based films with his wealth of poems.literature etc and a sound , understanding of good text. So yes, Bollywood films are taking a cue from the OTT platforms because basic stuff wont work anymore but original and novel stories will.

How do you analyse the process of film-making today?
A decent script with a decent film maker would mean that 60 percent of what he puts on paper will reflect on screen and that is good. I am averse to the ‘ Ho jayega, bana denge” types. I am particular about the gaze of the film maker and I don’t take narrations but read the script. I have to be completely convinced about what the writer is writing. When I read, the film has to appear before me.

Tell us about your costars?  What impressed you about them?
I have learnt from each co star of mine. Zeeshan, Rajkummar, Rasika, Shweta, Vicky – all of them!

Kalki Koechlin
She is amazing and has such a  unique body of work. She’s able to manage theatre, podcast, films, writing etc. I sincerely appreciate people who have a constant hunger to be a better artiste.

Naseer saab
He is simply incredible. A teacher.

Ranbir Kapoor
Such a good actor. Someone I would love to work with – he is so talented.

All the girls in Four More Shots Please

It gives me great joy to see everyone doing so well. 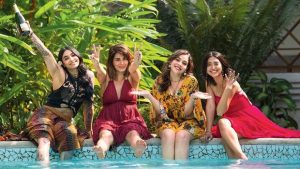 Headlines Of The Week