Audiences who have watched Netflix’s Emily in Paris would have noticed that the show’s wardrobe has several similarities with series like Sex and the City, as well as the hit movie The Devil Wears Prada.   This is because,  the show’s costume designer is Patricia Field, the mind behind SATC and The Devil Wears Prada. She also mentored Eric Daman, who dressed Serena and Blair in Gossip Girl.

Actor Lily Collins who plays Emily in ‘Emily in Paris,’ is considered to be a doppelgänger of Audrey Hepburn and the designer is a major fan of Audrey Hepburn.  “So, I was like, I’m gonna do an homage [to Hepburn in Funny Face],” according to Field. 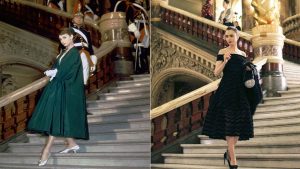 The 1957 film Funny Face starred classic film star Audrey Hepburn, and it tells the story of a frumpy Jo Stockton who turned into a fresh-faced model after an impromptu photoshoot at the bookstore where she works. The movie’s costume designer was Edith Head and the clothes were by Hubert de Givenchy, Audrey’s favorite designer. The film was nominated for Best Costume Design at the Academy Awards.