“Musically, I think one of my greatest achievements has been starting to write my own songs, which I’m really excited to share with everyone this year!” says Toronto’s Nightingale, Jonita Gandhi. The award-winning play-back singer is the voice behind chartbuster tracks like Dil Hai Mushkil and Sau Tarah Ke.

The singer grew up with music and says her father is her biggest supporter. “My first time performing live was with my dad and his band when I was 7 years old at a Christmas party. I was so nervous, so much so that I messed up the lyrics while performing, but he was so encouraging, and always has been. I have great memories performing with him at so many events.”

“Whenever I heard a song that I liked, I would try to sing it in my own way. I don’t think I had a delineation between genres. I just tried to sing how I thought it should sound, and eventually I developed a blend of eastern and western techniques in my singing.” Having grown up in Canada, Jonita feels extremely fortunate to have been exposed to so many different kinds of cultures that gave rise to her very own distinct personal style of singing.

The playback singer’s journey first began on YouTube before she achieved success, and believes that it’s a great way to “start exploring, and developing, your skills and figuring out your sound in front of an audience”. Further stating that digital spaces are a great way to “reach the eyes and ears of people who you wouldn’t easily be able to reach otherwise”. 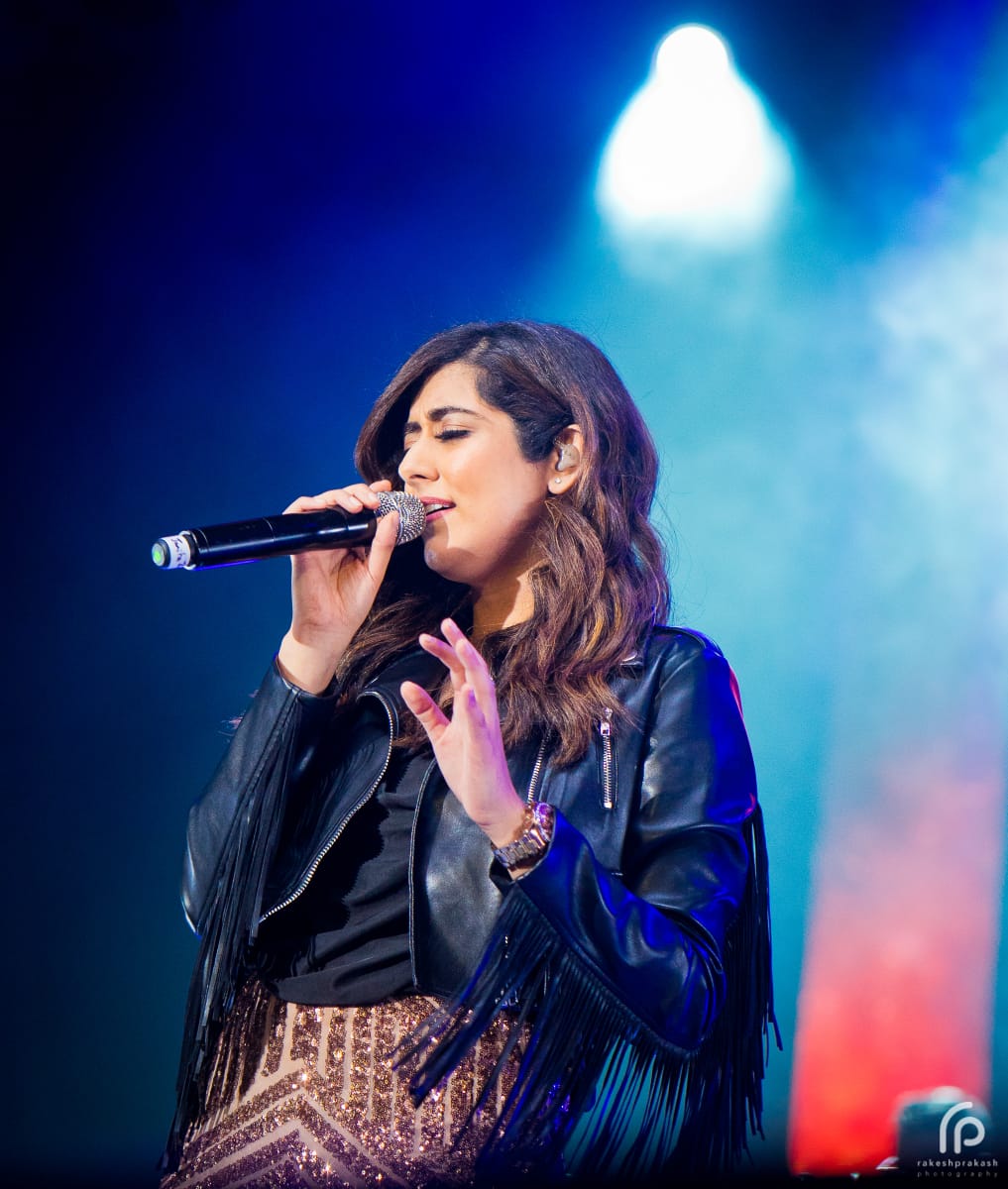 The singer is well-loved in the Tamil film industry as well and often sings in languages she is unfamiliar with. To ensure there are no phonetic errors and such, Jonita has a very elaborate process in place. Relying heavily on native speakers and sound engineers, the singer ensures her pronunciation is perfect. “In some languages, even the slightest mispronunciation can change the meaning of the word drastically, so I make sure I put in the effort to try my best. Over the years I’ve developed a sort of legend that helps me write out the word the way I hear the sound. I can be a little annoying about ensuring that I’m getting it correct hahaha, but I think it’s worth it!”, says the singer.

Jonita was also recently featured on Times Square for the latest track- Top Tucker, a collaboration track with Badshah. Here’s what she had to say about it-
“It’s an indescribable feeling to see yourself at Times Square. I wish I could have seen it in person! Working with Badshah is a breeze! He’s a fun person and although this song was a remote collaboration, the process was so smooth because we already have a great rapport. I’m so glad to have been on board for Top Tucker!”

The young artist is always looking at ways to improve herself, taking inspiration from artists around her. From Lata Mangeshkar to Bruno Mars, the singers try to incorporate techniques that work for her voice and music. “Each artist has something unique about their style and there’s so much to learn from everyone,” says the singer.

Jonita has recently also wrapped up shooting for a reality show titled Taare Zaamen Par, and while apprehensive, she feels extremely blessed to have her first reality television experience be alongside Shankar Mahadevan and an incredibly supportive team. “It was so much fun mentoring the kids with Tony Kakkar, and I learned so much from Sugandha Mishra on set!”

And in these troubling times of tragedy, Jonita has found herself slowing and spending time in ways she would have never gotten a chance to. She has been able to catch up with her family and focus on developing skills such as songwriting during the course of the pandemic. The singer has been working on some new music that she has been working on during her time off, and is excited to share it with audiences this year!

J-Lo and Alex Rodriguez split after four years together