The beloved medical drama by ABC, Grey’s Anatomy gave its fans quite a shock as they reunited their favourite couple, Derek Shepherd aka McDreamy and Meredith Grey at the end of the season 17 premiere, in the episode titled, “The Centre Won’t Hold” that aired on November 12.

We see Meredith Grey, played by Ellen Pompeo collapse in the parking lot at the end of the episode, leading her to dream of a beautiful beach with Derek waiting for her. The show’s creator mentioned how difficult it was to keep this gigantic secret under wraps. From having top security on the sets to only telling a handful of cast members of Patrick Dempsey’s return, extreme steps were taken to ensure that fans will be delightfully surprised this season. 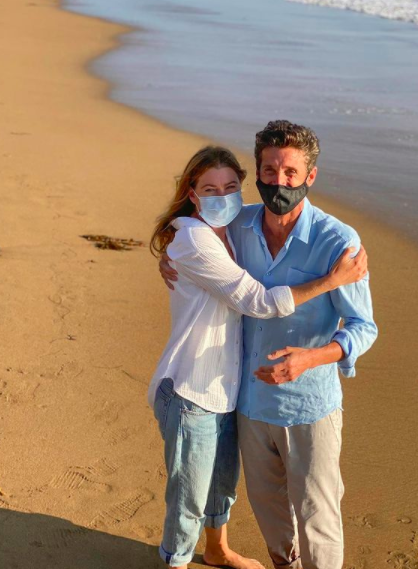 This reunion is an attempt, and a successful attempt at that to bring some joy to the world amidst the tough circumstances 2020 has set up, along with providing a beautiful message of togetherness and kindness in these tough times. Ellen Pompeo and Patrick Dempsey, both went on to share pictures together on their Instagrams.

Fans will be happy to know that that little scene at the end of episode 2 isn’t the last we’ll see of Derek Shepherd. Krista Vernoff, the show’s writer, and Patrick Dempsey have confirmed that he will be appearing in more episodes this season. In fact, Vernoff has teased the return of more fan favourite original characters this season as she urged fans to tune in to see who else will end up at the beach.

The next episode, My Happy Ending is directed by the show’s very own Kevin McKidd, who plays Dr. Owen Hunt. With more details about Meredith Grey’s mysterious medical condition and budding love stories, there is a thick layer of anticipation in the air. My Happy Ending will air on November 19, 2020.

From the return of McDreamy to the cute reconciliation of Dr. Richard Webber and Dr. Catherine Avery, Grey’s Anatomy season 17 has already had fans thankful for its return and exhilarated to see it further. This season, the doctors of Grey Sloan Memorial Hospital will win, lose, love, and grow as they battle the raging Coronavirus pandemic that has halted their reel world as well as our real world.

Check out the promo for My Happy Ending here:https://youtu.be/16_S_Mf2E0A

Want to live in SRK’s house? Here’s how!