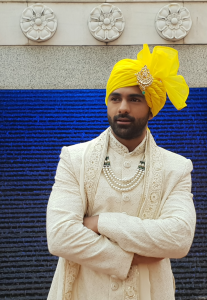 The song, produced by Dharma 2.0 with their stunning set design, dreamy costumes, and lavish set makes the track the coolest wedding song of the year! While Alaya looks delightful in her Manish Malhotra outfit, Taha steals the show in this Goldie Sohel playback.

Taha, made his web debut recently with Alt-Balaji’s Bekaaboo 2.  This is his second outing with the Dharma banner after Karan Johar produced Gippy which was Netflix’s Masaba Masaba helmer Sonam Nair’s directorial debut.

The fresh pairing of Taha and Alaya on screen, directed beautifully by Punit D Malhotra, makes for a dreamy sequence as the chemistry of these two seems to be sizzling. The song hits the right chords of romance, innocent love, and friendship.

Aaj Sajeya is like a breath of fresh air that has managed to touch hearts with its smooth tune and choreography and is going to retain its top spot as the ultimate choice for desi weddings around the world for seasons to come.

Bappi Lahiri recovering from Covid 19 and a lung problem. We wish him a speedy recovery!