Satyajit Ray was born today in 1921 in Calcutta into a highly creative family. His grandfather and father were men of many talents.  A young Ray had grown up on Hollywood movies, so when his ad agency sent him to London for higher training, he spent more and more of his time in the company of films and started losing interest in advertising. In a prolific career spanning nearly four decades, Satyajit Ray directed 36 films, including feature films, documentaries and shorts. His films have received worldwide critical acclaim and won him several awards, honours and recognition — both in India and elsewhere. He was conferred the Honorary award at the 64th Academy Awards in 1991. Do scroll down to watch the video of his acceptance speech!

Ray’s  Apu’s trilogy is a series of three films ( that describe the childhood, education and early maturity of a young Bengali named Apu (Apurba Kumar Roy) in the early part of the 20th century), is considered by critics around the globe to rank among the greatest achievements of Indian film. It is established as one of the most historically important cinematic debuts. Pather Panchali won at least thirteen international prizes (including Best Human Document at the 1956 Cannes Film Festival), followed by eleven international prizes for Aparajito (including the Golden Lion at the Venice Film Festival) and numerous other awards for Apur Sansar (including the Sutherland Trophy at the London Film Festival). The three films are as under 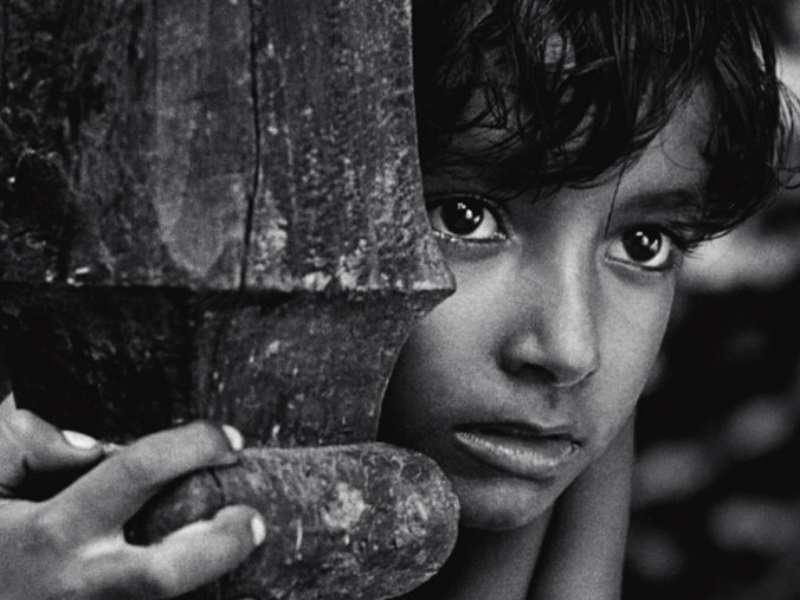 Apu’s early experiences in rural Bengal as the son of a poor but high caste family are presented. Apu’s father Harihar, a Brahmin, has difficulty in supporting his family. After the death of Apu’s sister, Durga, the family moves to the holy city of Benares. 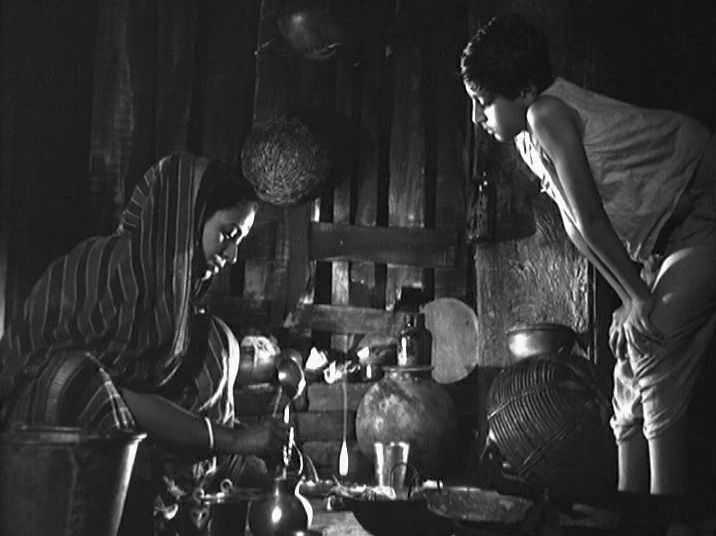 The family’s finances are still precarious. After his father dies there, Apu and his mother Sarbajaya come back to a village in Bengal. Despite unrelenting poverty, Apu manages to get formal schooling and turns out to be a brilliant student. He moves to Calcutta to pursue his education. He slowly distanced himself from his rural roots and his mother who was not keeping well at the time. In the process the growing Apu comes into conflict with his mother. Later he is informed that, when his mother dies too, he has to learn to live alone. 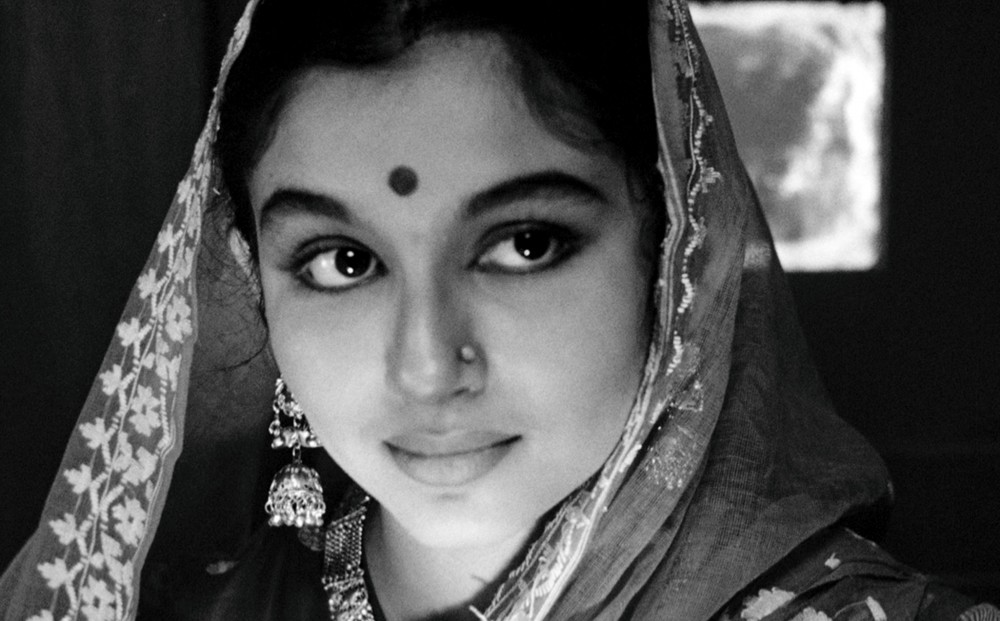 Attempting to become a writer, Apu unexpectedly finds himself pressured to marry a girl whose mother rejected her mentally ill bridegroom on the day of their wedding. Their blossoming marriage ends in her death in childbirth, after which the despairing Apu abandons his child, but eventually returns to accept his responsibilities. 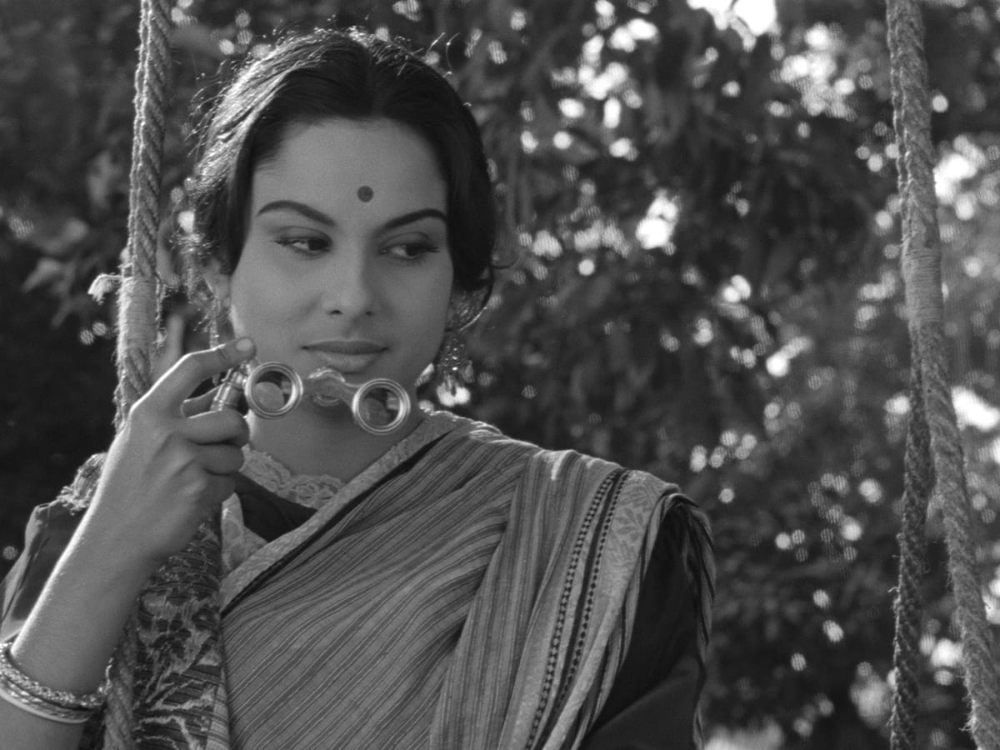 Some of Ray’s best-loved classics came in the 1960s. Based on Rabindranath Tagore’s novella Nastanirh, Charulata (1964) gave Madhabi Mukherjee the role of a lifetime as a lonely wife reinvigorated by the arrival of her husband’s charming cousin. 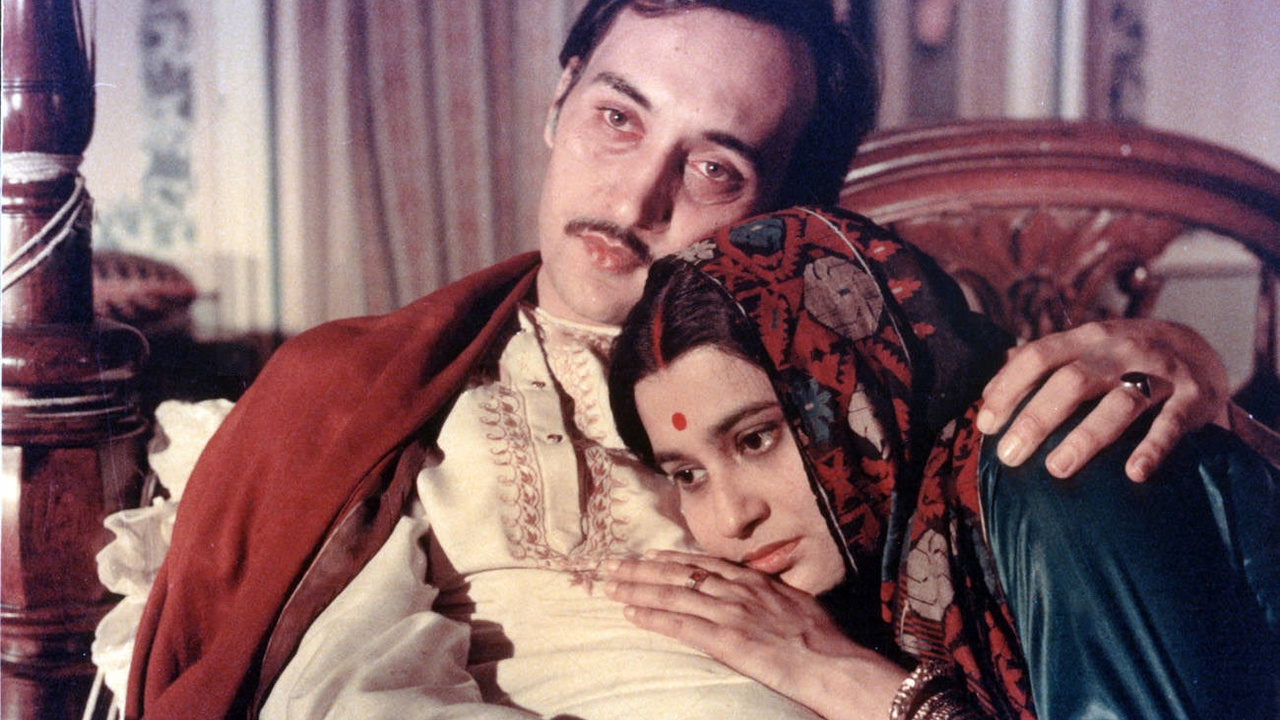 The story is set in 1907 on the estate of the rich Bengali noble Nikhilesh (Victor Banerjee). In the chaotic aftermath of Lord Curzon’s partition of Bengal into Muslim and Hindu states, the nationalist movement is trying to impose a boycott of foreign goods by claiming that imports are at the root of Indian poverty. He lives happily with his beautiful wife Bimala (Swatilekha Sengupta) until the appearance of his friend, a revolutionist, Sandip (Soumitra Chatterjee) that creates a love triangle. 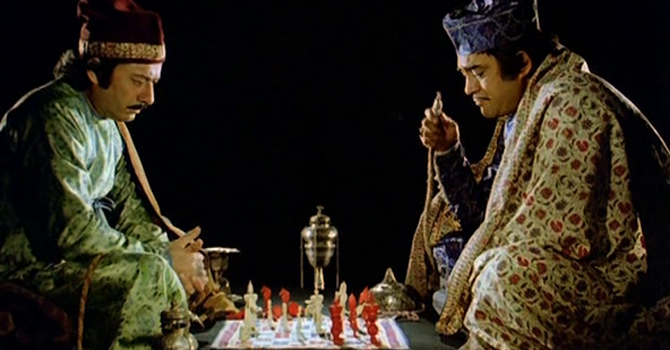 Having seen the thriving feudal system in Bengal up close, Ray depicted the debauched and fading vestiges of royalty. His only Hindi film, Shatranj Ke Khilari (1977), was the ultimate farce about the decline of Awadh. It is based on Munshi Premchand’s short story of the same name. where Amjad Khan plays the role of Nawab Wajid Ali Shah, King of Awadh, and Richard Attenborough enacts the role of General James Outram. The main cast includes actors Sanjeev Kumar and Saeed Jaffrey as the chess players. It also has Shabana Azmi, Farooque Shaikh, Farida Jalal, David Abraham, and Tom Alter. It has Amitabh Bachchan as the narrator. This is the only full length Hindi feature film of filmmaker Satyajit Ray. He later made a short Hindi film for TV named ‘Sadgati’- another adaptation of Premchand’s short story. 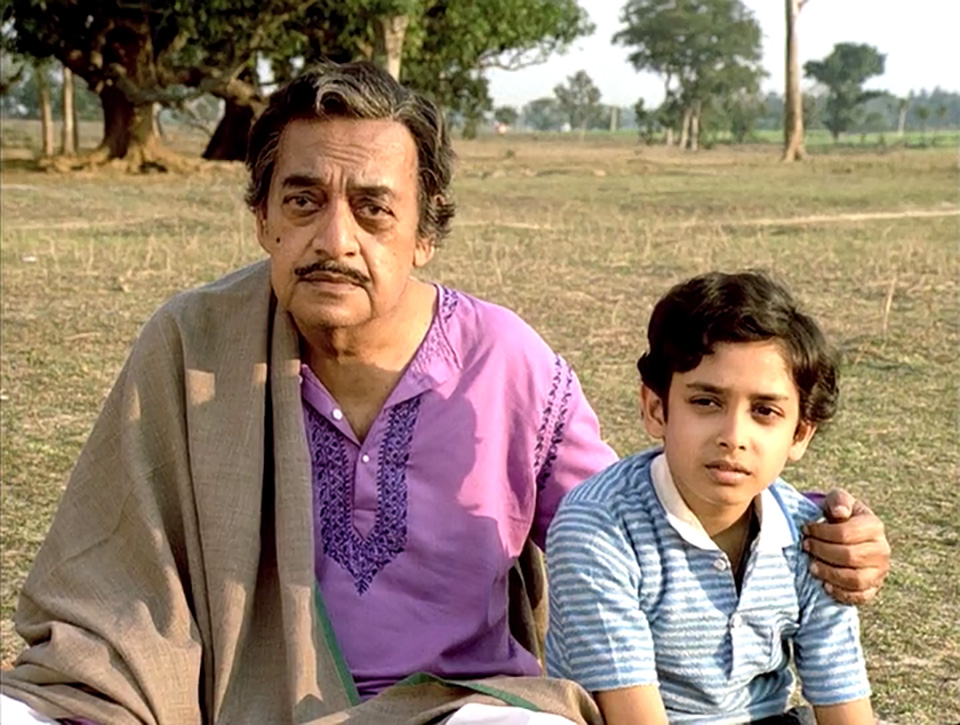 However, like a true master, Ray kept one of his best for the last. 1991’s Agantuk is among his most intellectually stimulating films. Utpal Dutt gives one of the best performances of his career in the film, as the stranger who calls himself Nemo – or, ‘Mr No One.’ Dipankar De gives a fantastic performance as Sudhindra Bose and in a small but significant role, Dhritiman Chaterji is brilliant as the tough-talking lawyer who, out of sheer frustration of not being able to win a debate against the learned Mitra, chooses to hurl insults at him instead. Mamata Shankar is literally perfect as Anila, in what almost seems like a role written for her.

Here is his speech at receiving the Honorary Award at the Oscars in 1991.

Winner: To Satyajit Ray, in recognition of his rare mastery of the art of motion pictures, and of his profound humanitarian outlook, which has had an indelible influence on filmmakers and audiences throughout the world. (accepted on tape from Calcutta, India)

SATYAJIT RAY:
“Well, it’s an extraordinary experience for me to be here tonight to receive this magnificent award; certainly the best achievement of my movie-making career. When I was a small, small school boy, I was terribly interested in the cinema. Became a film fan, wrote to Deanna Durbin. Got a reply, was delighted. Wrote to Ginger Rogers, didn’t get a reply. Then of course, I got interested in the cinema as an art form, and I wrote a twelve-page letter to Billy Wilder after seeing “Double Indemnity.” He didn’t reply either. Well, there you are. I have learned everything I’ve learned about the craft of cinema from the making of American films. I’ve been watching American films very carefully over the years and I loved them for what they entertain, and then later loved them for what they taught. So, I express my gratitude to the American cinema, to the motion picture association who have given me this award and who have made me feel so proud. Thank you very, very much.”