Filmmaker Ali Abbas Zafar has announced he has tied the knot with partner, Alicia Zafar. The 38-year-old director took to Instagram and shared a picture of the couple embracing each other.  “1400 years ago Imam Ali said to Fatimah Al-Zahra’s, all my worries and sadness disappears when I look at your face. I feel the same Alicia Zafar. Mine for life,” Zafar wrote. 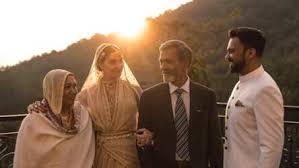 The post comes a day after the “Sultan” director shared a close-up picture of the couple holding hands, writing, “Bismillah”. Friends and colleagues from the industry, including Ranveer Singh, Arjun Kapoor, Bhumi Pednekar, Ananya Panday, Tisca Chopra, Disha Patani among others congratulated the couple. Ali  met Alicia during a work trip to France and pursued her. “She is a first-generation Iranian from France. I had gone there for work, and immediately fell in love with her. I pursued her for almost two years, convincing her that I am the man who will keep her happy. It has been a difficult task, but I am glad she finally agreed,” he said.

Ali is known for his blockbusters such as Tiger Zinda Hai, Bharat and Sultan, all three starring Salman Khan. He has created the Amazon Prime drama series, Tandav, which will debut on January 15. Also in the pipeline is a superhero film with Katrina Kaif and the third film in the Tiger franchise. He has also written and directed Gunday, starring Ranveer Singh, Priyanka Chopra and Arjun Kapoor.

Bhumi Pednekar is looking for ‘Young Earth Champions’ across India!