Iqbal Khan, famous for his roles in television series Kaisa Ye Pyar Hai, Kavyanjali, Sanjog Se Bani Sangini, and Dil Se Dil Tak, plays Zorawar Kalra in Voot’s new series Crackdown, directed by Apoorva Lakhia. Those who have watched the series, vouch that Zorawar Kalra played by Iqbal Khan is sure to make you fall in love, with his intense roleplay and salt and pepper look. The actor who is unafraid to call a spade a spade, talks to Deblina Munshi about the various shades of his character, the receptiveness of the industry, and much more in this exclusive interview.

What’s kept you motivated and excited through the lockdown?
Initially, it was a lot of time together and thanking God that we’re in a position to be under a roof, be comfortable, and have our resources intact. A lot of gratitude for that! And, God has been very kind, so been very lucky that way. Alhamdulillah!

How did you land upon this role in Crackdown?
I was somehow trying to break through this break phase. Now it is different, but a year or year and a half ago, they’d look at television actors in a very different way. It wasn’t the best option to cast a TV actor. I don’t know the math behind it but that’s how it was though now it’s better but still not there. So, I met Apoo sir and he’s a great guy. He’s not someone who has this kind of thing going on his head. He’s somebody who has lived abroad, he has the kind of mentality that for any form of art, if someone fits the role, he’ll take them, irrespective of where they come from.

What do you think is the reason behind such a perception?
Well, things have become better now. I’m in Crackdown, there are other shows with television actors. It’s still becoming better, but it’s still not there. I’m not sure what’s the math behind it but I’m presuming there is a certain kind of way the stories are on TV which is regressive, maybe they feel that’s how the actors will perform. My answer to them is ‘Why don’t you test them?’. At least take an audition.

What is your character in Crackdown like?
The name of my character is Zorawar Kalra. He is in a very important post in the intelligence agency of our country. He’s a patriot, he’s ruthless, he’s a bigot, he has no heart when it comes to matters of the country. Till the end, you’ll not know whether he’s this side or that side. He’s pretty interesting and very different from all the things that I have done until now. 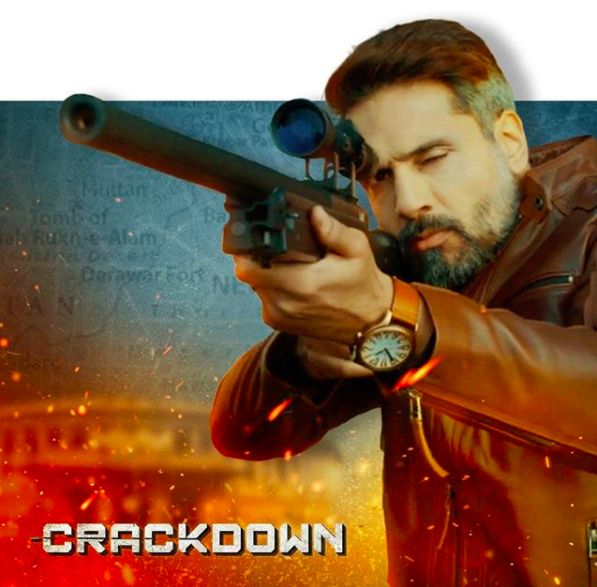 How did you transform into Zorawar?
I have completely followed Apoo sir in this. Just in one initial meeting, he tells you what he wants and then you show him what you can bring to the table. Then he does the minus and plus to it. So, there’s no rocket science in that. Since I was in character, I did what he wanted me to do and say but I wanted him to talk not like Iqbal. So there are certain scenes where Zorawar talks like Apoorva Lakhia.

What was about the script that attracted you to it?
The script and the role came secondary, what got me into it was Apoorva Lakhia. The fact that everything else turned out good was a bonus. Initially, it was just him.

How was your rapport with your costars?
Superb! It was a nice set…a good set of people, who were only interested in working. There was no politics and no game playing, no negative energy on set. Everybody was very nice, focused, and very friendly with each other.

Where was Crackdown shot?
We shot in Chandigarh, Kasauli, Delhi Mumbai, and Nanded.

What kind of roles do you want to play?
I don’t keep that in mind. I don’t have a reservation like that. It’s about what new is offered to you, and that is something that you want to do. I now leave it to that. I’m an introvert, I’m a little shy, I’m not that outgoing so that kind of role comes very easy to me but something like Zorawar is not me. That is what I like doing. Something that’s not me.

Do you see yourself exploring other arenas of filmmaking?
Yes, anything related to this profession, I would definitely, at some point get into it. I want to do it, whether I do it or not, I don’t know. I would do anything that is interesting within my industry.

Is there something you particularly incline towards?
I’m heavily inclined towards story writing. I might not be great in screenplay and dialogues. I think I’m good when it comes to a basic story. I definitely see myself, at some point, directing something.

Check it out: 5 psychological thrillers to watch if you loved Andhaghaaram!