Miss World Bulgaria 2019, Margo Cooper is all set to release her short film on sex trafficking in collaboration with Triveni Acharya and her Rescue Foundation. A passion for philanthropy and an eagerness to help led Margo to create this short film.

Margo reasons her coming to India to shoot this short film saying, “I like to watch documentaries, which highlight the reality of the world, and I have noticed that most of them don’t provide any information on how to help. So, I decided to do such a project myself. India is one of my favourite countries to visit, and I used to live there, too. I decided to make my trip meaningful by filming my first documentary about human trafficking there and also visit one of the centres which rescue girls from sex slavery.” 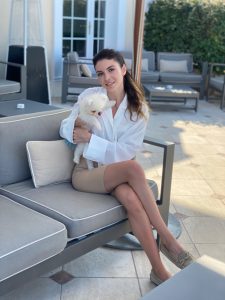 Cooper’s documentary highlights the problem of sex slavery while also acting as a call for help. She says an NGO is not enough to support these girls, they also require the support and love of others living in the society. She urges her viewers to provide these girls with employment opportunities in addition to basic necessities.

Recalling the pathos of young girls sold by their families into sex slavery she comments, “The conditions are horrible, some of them live in cages and there is no light at the end of a tunnel, no hope for them. All of them are coming from rural areas of India or neighbouring countries.”

Keeping her faith in humanity, Margo Cooper hopes that people do not hush these concerns down but willingly and openly speak about it. She says that sex trafficking is an antihuman tragedy and an ugly spot in the world. Cooper says trafficking must be cured and beaten at all levels.

Meanwhile, when we recently got in touch with the beauty queen and asked about Bollywood, she said she’d be willing to give it a try for sure. A self-confessed Bollywood buff, Margo revealed to have watched a lot of Hindi cinema too. She even shared that she finds Bollywood heartthrob Hrithik Roshan to be quite handsome.

Bollywood style divas get 'Saree'ed away!

Hrithik Roshan has a fan in Miss Bulagria Margo Cooper, who finds him ‘very handsome’