Shabana Azmi has been cast as Admiral Margaret Parangosky, the head of the Office of Naval Intelligence, in Showtime’s sci-fi show called Halo. The show is an adaptation of the Xbox video game and will be produced by Hollywood legend Steven Spielberg.Directed by Otto Bathurst (Peaky Blinders, Black Mirror), much of Halo was shot in Budapest, Hungary. Azmi will be there in 8 of the series’ 9 episodes.

“It’s a formidable part, not a small role or anything. When my nephew first found out, he went O-M-G. Now, that expression singularly restored my faith in my own celebrity” 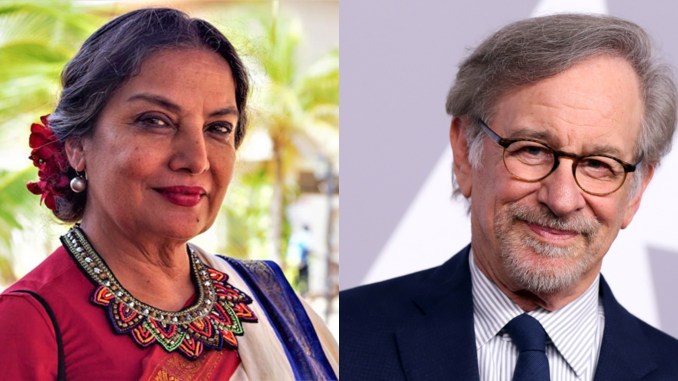 Azmi has been spending a lot of time with her young nephews, in whose eyes she’s suddenly become “hip” after signing up with Spielberg’s Halo, a move she sees as acquainting herself with an audience who may not have seen her earlier work.

“When my nephew first found out, he went O-M-G. Now, that expression singularly restored my faith in my own celebrity,” Azmi laughed, mimicking the millennial expression of awestruck delight.

“I want to be relevant. I don’t want to be a relic in a museum. My nephew and other kids in the family have been helping me with understanding Halo, the video game,” she said.

Halo filmed “55%-60%” of its first season before the pandemic shut down production, was set to debut on Showtime in 2021. But ViacomCBS announced today that the show is moving to the newly renamed Paramount+ streaming service (formerly CBS All Access) and will be available in early 2022.

News of a live-action Halo series broke all the way back in 2013, with Steven Spielberg set to executive produce the project Spielberg remains attached to the project, eight years later, with His Dark Materials’ Otto Bathurst directing. Pablo Schreiber (a.k.a. Pornstache from Orange Is the New Black) is set to don the Master Chief helmet, and the original voice of the AI companion Cortana, Jen Taylor, will reprise her role in the series. Halo Infinite, the sixth game in the main Halo series, is due out this fall.

"I' ll get married after Salman Khan does," says Mika Singh