All Things Filmy, Bollywood, Entertainment, Features, Films
November 11, 2021
by Manju Ramanan
0
If there’s anyone in Bollywood who’s on their A-game when it comes to experimenting with genres across the board, it has to be Saif Ali Khan! Breaking the shackles of the quintessential romantic hero, Saif has been seen catering to a bevy of emotions in the audience – the good, bad and ugly! He has made your blood boil as Langda Tyagi and Udaybhan Singh Rathore, made you ROFL as Vibhuti and empathise with him as Sartaj Singh; the mark of a good actor!

His experiments with a starkly different set of genres have always turned out well. Here’s diving into the various genres that Saif has indulged us in!

Sacred Games – Cops are generally portrayed on-screen as disciplined go-getters. With this hugely popular crime action thriller Netflix series, Saif Ali Khan not only gave us a cop with a different shade but he also set the trend for A+ listers to start taking OTT seriously.

Tanhaji – The Unsung Warrior – In the historical drama, Saif’s cruel character Udaybhan Rathore tortured our senses with his inhuman ways. 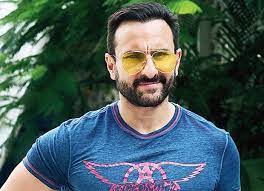 Omkara – Langda Tyagi goes down in the history of Bollywood’s most iconic villains! His antagonist in this crime drama was so potent that it even overshadowed the protagonist in the film!

Laal Kaptaan – An epic action drama film, Laal Kaptaan had Saif Ali Khan wowing the audience as Gossain, the bounty hunter. The movie put on display Saif’s bold choice of genre and showcased yet another unrecognisable avatar of his!

"I will always take up roles that will challenge me to mold myself," says Andhadhun actress Rashmi Agdekar