As I go through my questions for Sonu Nigam waiting to shoot with him at the Sajan villa in Dubai, I contemplate the first question – do I start with my favourite song, his Filmfare award winning song, him being the voice of SRK, his impersonation of various artistes, his Vlogs, his versatility, his recent Instagram posts or his recent song Do ka Chaar in the web serial Chaman Bahaar? This is my first interaction with the man whose songs have touched me as much as so many millions of his fans – what is that he has not been asked that I will ask today? As I put my pen in my small notepad, he has already arrived and greets me with a warm hug. What follows is a fluid conversation, starting from his childhood to his making Dubai his second home – each stage of his nearly five decades in music, peppered with songs, instances, reverence, mischief and a lot of love. Meanwhile, he has been to the Mall of the Emirates the previous day to shop for the shoot that follows my interview.  Read on …. 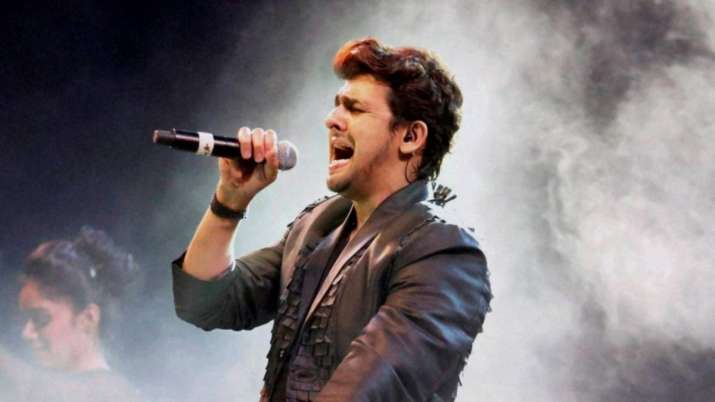 You started very early, at the age of four?

I think it is karmic. My father who was and is a good singer was singing Rafi saab’s ‘O Duniya Ke Rakhwale’ but when I insisted to be onstage, he sang Kya Hua Tera Vaada. My mother was a good singer but more than that, she had great musicality about her. My son Nevaan and I sang on stage together, we don’t anymore.

The family had a special affinity towards Rafi saab?

Yes, we did. One should aim high and my parents introduced us to the best music they knew. Their sense of music was highly refined. We used to hear songs from Rafi saab, Kishore da, Shamshad Begum, Geeta Dutta, KL Saigal and more. I grew up in a two-bedroom lower middle-class home and were part of our parents lives and philosophies from childhood. We had a small harmonium in the house that I used to play and I loved percussion but we didn’t have any other instruments. My fingers would drum on tables, chairs and sofas – the means aren’t important, the zeal is. You don’t need material things to fuel your passion.

Reverence towards the masters has been unique to your personality?

There is no other way I can be. I am not constituted in any other way. I was 18 years old when I came to Mumbai to be a singer. At that time people the 36-37-year old singers were like Suresh Wadkar jee and Kumar Sanu were my gurus. I learnt their songs would copy their songs. Today I am 46 years old. Why can’t I find a guru in someone that is 36 years old? There is no ego. Life should be met with a lot of grace and humility. Your teachers are hiding in your face. You got to acknowledge them. And people who are really filthy with me too have been my gurus for they have told me what not to do.

Who was the first big singer you met?

I used to meet Sachin Pilgaonkar who is an actor and a good singer. But if you ask me for a singer then it was Tun Tun jee. She used to come to Delhi often and I am so glad you asked me. Also, Biswajeet jee I used to meet him in Delhi. Then, when I was 14 and a half years old I met Annu Mallik who told me to meet him when I grew older. So, when I went to Mumbai in 1991, I first met Sachin jee and then Annu Mallik.

Your first mainstream song was picturized on Anupam Kher?

Yes, though I had sung for Kishen Kumar in T series films, in Papa Kehte Hain, I sang for Anupam Kher jee while Udit Narayan jee and Kumar Sanu sang for Jugal Hansraj who is a few days older to me. I say this in good humour. Again, Sandese Aate Hain from Border was picturized on people of different age groups. But it was Dil Deewana that became the song filmed on Shahrukh Khan that became my mainstream debut with a leading star.

How do you lyrically own every song you sing?

There is no strategy. There is a devotee sitting inside me. When I sing a song, I put in it a lot of my virtues. I put myself in it. In my interviews too, I do my best. I do everything with a lot of dedication. It is like an act of surrender. I will convert my persona to flow into the body of the song. You become that shape – water or air.

A playback singer is an actor in front of the microphone? Does it still hold true?

If you do justice with the style of the compostion and the lyrics, you are almost there. And then if you take the personality of the character onscreen, it creates another kind of magic. Rafi saab in Sar jo tera chakraye was also singing Yeh Zindagi ke Mele and Tu Ganga ki Mauj mai Yamuna ka Dhaara in the same era. While he excels in all the songs, in Sar jo tera chakraye, he had to say the Tel Maalish in the way the actor Johnny Walker opened his mouth. That is a great artiste. Which is why today, if you get a song sung by six other singers, you don’t recognize the uniqueness in each voice – they are filled with air and then they all fly off like gas balloons.

You have met and interacted with the best of the best?

I am the luckiest guy in the world. There is no one I haven’t met. Fame doesn’t decide success. My television show that I hosted had all the legends of the Hindi film industry come to my show. Be it Naushad saab, Ghulam Ali saab, Pankaj Udhas, Khayyam saab, Pt Shivkumar Sharma, Zakir Hussain, Pt Hariparasad Chaurasia. I was like a kid in the candy store. I met Mehendi Hassan in London and he couldn’t bend down and I fixed his shoes. I took this as an opportunity to touch his feet and he said, “Yeh bachcha bahot accha hai”. I had the rare opportunity of Ghulam Ali saab making me learning a sargam. I still remember it. I was singing for Anil Biswas, Salil Chaudhry and Laxmikant Pyarelal.

What is so unique to your most requested song “Abhi Mujhme kahin.”

It represents collective destinies – from the composers Ajay-Atul to Amitabh Bhattacharya, director Karan Malhotra, Hrithik Roshan and me, the song was well timed. My mother was about to pass away and this was her parting gift to me. I remember it was around January- February with all awards happening and she was cancer struck but still very happy that I had won awards. This song has a personal impact on me. I believe in vibrations – my personal vibrations of the song are present in it due to what was happening around me.

Do you feel that artists convert pain into art?

Not all artists do that. Some surely do. Sometimes, we are not in the right state of mind but the song happens and you sing it. No one knows how you did it, but you know. When I recorded Di Dooba dil dooba with Ram Sampath, I was a in horrible state of mind.  But it doesn’t touch the song. Pain does become art. But a sensible man should learn to not let anything affect you or your art.

Have you refused songs if the lyrics are bad?

Yes, I have but as a young singer I have sung songs like Mera Paau bhari ho gaya, as well. That time I was too insignificant to take responsibility of my songs. I wasn’t revered then. Today, yes, after a certain point, you have to be a little careful about the kind of content you are coming up with.

You have a repertoire of so many songs including many picturised on SRK?

No credits to me, I am a lucky man. Good songs came to me and will come to me always. But the mafia changed the game. My recent song Do Ka char will not be part of most radio stations because it is from a web serial. If a song is promoted on TV, people go and buy CDs and cassettes. Today, most people depend on the radio and someone else is deciding your playlist not yourself. That someone else will not allow people outside his circle to hear a song he hasn’t created. But the digital world is changing all of that.