Yash Raj Films has finally made the much-awaited announcement. After a six-month-long wait, YRF has announced the release dates for a slate of films including the Bunty Aur Babli sequel. The company is excited to bring audiences back to theatres to experience films on the big screen. The company has stated previously that its films will not be released on OTT platforms, as they are experiences meant for a big cinema.
Here are the official release dates: 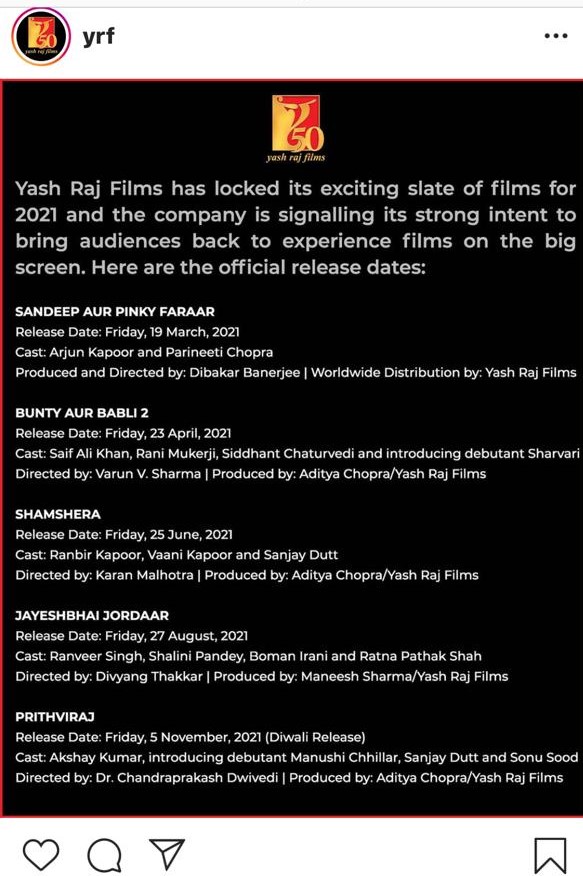 Sandeep Aur Pinky Faraar starring Arjun Kapoor and Parineeti Chopra will finally release on 19 March 2021. The film which was delayed for the longest time due to the lockdown was supposed to release in the past year, however was pushed for later.

The Bunty Aur Babli sequel will star Rani Mukerji and Saif Ali Khan in a special appearance with Siddhant Chaturvedi and Sharvari in lead roles. YRF’s highest budget film, Shamshera will not only star Sanjay Dutt but will also showcase Ranbir Kapoor performing high octane stunts with the help of VFX.

The popular production house is sure to keep audiences entertained with this fabulous line-up.

Why Anil Kapoor is Unstoppable!