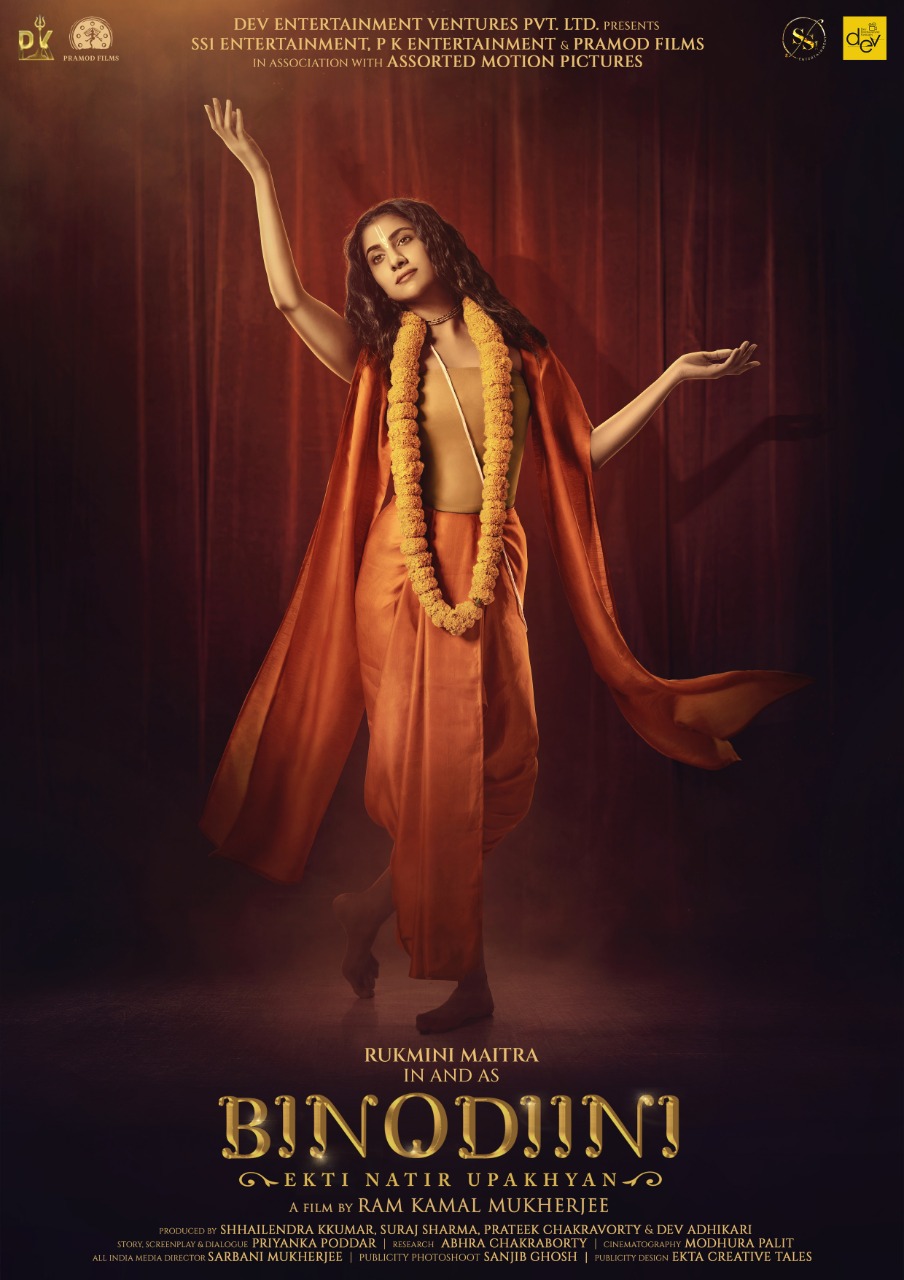 The fictional biography of Bengal’s theatre legend Binodini Dasi will be presented by Dev Entertainments Venture and produced by Shhailendra Kkumar, Suraj Sharma and Prateek Chakravorty.

Director Ram Kamal Mukherjee has announced the lead cast of his much-talked about biopic Binodiini Ekti Natir Upakhyan. Bengal’s noted actor Rukmini Maitra will play the much coveted role on celluloid. The makers unveiled the teaser poster of the film with Rukmini as Shri Chaitanya Mahaprabhu, a character that Binodini Daasi played on stage. The actress is completely unrecognisable in her Chaitanya avatar.

Produced under Mumbai based production houses Pramod Films, SS1 Entertainment and P K Entertainment in association with Assorted Motion Pictures, the story, screenplay and dialogue has been penned by Priyanka Poddar. “I always wanted to tell the fascinating story of Binodini Dasi for Bengali audiences. I had to struggle for almost two years to get the kind of budget I was expecting to mount a musical film like this. The only person who stood beside my faith like a Rock of Gibraltar was Rukmini Maitra. Since she saw my work in Season’s Greetings and Ek Duaa, she believed that I could probably handle the pain and journey of this mega star from Bengali theatre. I am elated that Rukmini will be my Binodini,” says acclaimed Bollywood filmmaker Ram Kamal Mukherjee.

Rukmini has been working on this film for the past two years. From practising Indian classical dance to reading various books depicting the social status of women in that era. “It’s a dream come true for me. Since the time Ram Kamal mentioned that he wants to make Binodiini, I knew he would have a different take on the subject. Without questioning him even once, I trusted him blindly. This film would have happened two years ago, but Pandemic changed the entire scenario. Our Entertainment industry suffered the most. With such reputed banners, producers and most importantly Dev coming on board as presenter makes this movie a magnum opus indeed,” says Rukmini Maitra.

This biopic will be shot by cinematographer Modhura Palit in Bengal and Benaras, and will release next year Poila Baishak (Bengali New Year). Since it’s a period drama the makers will need enough time to recreate the era. Bengal’s superstar Dev in his official statement says, “Ram Kamal is a very senior personality and a talented filmmaker from Mumbai. I was not even aware that he was planning this film with Rukmini, until they shared the teaser poster. This was probably the most well kept secret from me. But when I saw the passion and love for their project, I as a creative person wanted to extend my gratitude towards a prestigious subject like Binodini Dasi. We don’t make such films these days, and it takes a lot of courage to touch upon subjects as sensitive as Nati Binodini. I am sure that Rukmini and Ram Kamal will create magic on screen.”

Prateek Chakravorty, grandson of veteran filmmaker Pramod Chakravorty of Pramod Films in Mumbai says, “I was completely bowled over by his narration and teaser poster. I knew this could be a game changer for Bengali cinema. Rukmini Maitra had put in so much dedication in bringing the character alive for a teaser shoot, says a lot about the efficiency of the entire unit. Since we completed 60 glorious years as producers in Indian cinema, we thought of joining hands on something that is creatively satisfying and commercially promising.”

Shhailendra Kkumar from SS1 Entertainment says, “I have my personal connection with Kolkata and Bengal. Since I am a singer and a composer, I have always admired Bengali art and literature. I have been associated with director Ram Kamal Mukherjee since his directorial debut Cakewalk, and I knew that he wanted to make Nati Binodini for the last two years. When he narrated the story and showed me Rukmini ji’s image as Chaitanya Mahaprabhu, I knew this film would become special.”

Young producer Suraj Sharma, P K Entertainment, says, “ I am extremely happy that filmmakers are finally taking the risk of telling untold stories from the past. I have heard the story of Binodiini Ekti Natir Upakhyan and I feel that this will connect with every women in our society who faced oppression from male chauvinist society.”

Nagesh Kukunoor to helm series based on the book ‘Ninety Days: The True Story of the Hunt for Rajiv Gandhi’s Assassin'

I Wanna Dance with Somebody Trailer: Naomi Ackie spectacularly transforms to portray Whitney Houston in the much-anticipated biopic