FACE OFF! The two Marvel stars engaged in a fun banter on their social platforms and it’s too epic to miss

Marvel star Chris Hemsworth’s fitness videos are always a rage on the internet and the Thor actor’s physique grabs eyeballs globally. And while millions of the actor’s fans and followers compliment the Aussie star on his motivational videos and photos, there was a surprise post from his Avengers co-star Chris Pratt that had the internet abuzz with their fun banter. 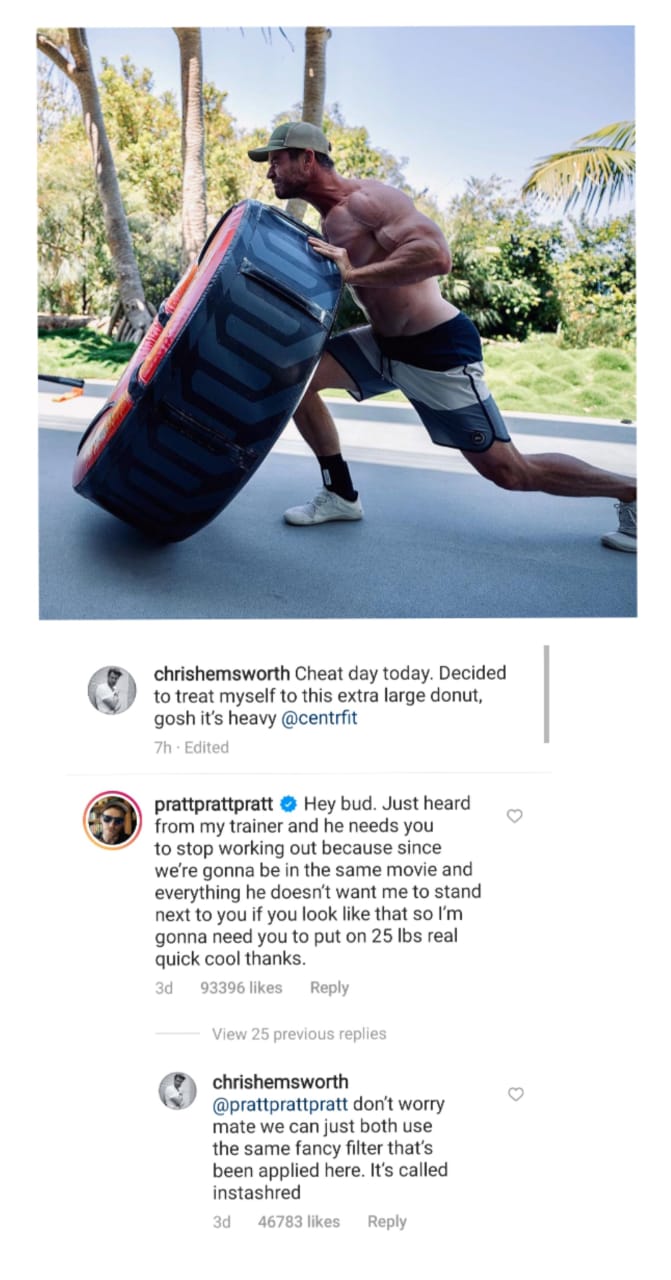 Hemsworth alongside posting a pic of him pushing a really huge tyre, wrote: “Cheat day today. Decided to treat myself to this extra large donut, gosh it’s heavy @centrfit”

To which Guardians of the Galaxy star Pratt, shared, “Hey bud. Just heard from my trainer and he needs you to stop working out because since we’re gonna be in the same movie and everything he doesn’t want me to stand next to you if you look like that so I’m gonna need you to put on 25 lbs real quick cool thanks.”

And in reply, Hemsworth said, “@prattprattpratt don’t worry mate we can just both use the same fancy filter that’s been applied here. It’s called instashred”

Check out the posts here:

While the two Chris’ kept their fans entertained, breaking the internet, what made it really interesting was the fact that the two actors in the MCU (Marvel Cinematic Universe) Avengers movie – Avengers: Infinity War (2018) had their characters engage in a similar chat aboard the spaceship when it came to talking about fitness with Pratt’s Star-Lord getting a tad insecure about Hemsworth’s buff bod as Thor in the presence of Gamora, Groot and Drax!

The posts also had the netizens and Marvel fans excited about seeing the two superheroes share screen once again in the upcoming Marvel movies!

Superstars in each other’s films!