Hollywood heartthrob Tom Cruise, who turned a year older recently (July 3), is easily one of the most-recognised producer-actors worldwide. Having made his acting debut with Endless Love (1981) in a minor role, he shot to instant fame with Risky Business (1983) in which he played the lead. Cruise then went on to cement his position and establish himself as one of the most-formidable names in Hollywood with Top Gun (1986) that wowed fans across the globe.

With three Golden Globe wins, three Academy Award nominations, and being a part of several Oscar-winning movies, the global icon is not only one of the highest-paid actors, but also the highest-grossing Box Office stars. Rain Man, A Few Good Men, Born on the Fourth of July, Mission: Impossible franchise (that boasts of five films so far), Jerry McGuire, Knight and Day, Magnolia, Eyes Wide Shut, War of the Worlds, Jack Reacher, The Last Samurai… the list of his most memorable films is a long one. Now the star is all set to revisit the skies in the Top Gun (1986) sequel Top Gun: Maverick that releases later this year (December, 2020) and all eyes are riveted on him as he revisits the iconic role as top aviator Pete ‘Maverick’ Mitchell, more than 30 years later.  Check the trailer of Top Gun: Maverick here:

While professionally the star’s been on a constant high, Cruise has been in news for his personal life as well. His divorce with second wife and fellow actress Nicole Kidman was followed the world over, as was his subsequent affair with Vanilla Sky co-star Penelope Cruz, and later marriage and divorce with Katie Holmes. His belief in the Church of Scientology also fuelled further speculation about his personal life that has been replete with several headline-grabbing incidents and events. And as he turns a year older, here’s taking a look at some of those events:

The infamous couch jump on The Oprah Winfrey Show

In May 2005, Tom Cruise grabbed eyeballs and headlines when what was supposed to be just another celebrity appearance on a talk show became one of the most talked-about moments in the history of all talk-shows. On Oprah Winfrey’s show, the star – who was during the time on promotional rounds for Steven Spielberg’s War of the Worlds – was questioned about his new-found love Katie Holmes. In an outburst of excitement, the actor professed his love for the actress and went on to excitedly leap on to the couch and jump a couple of times before settling back, even as a shocked Oprah exclaimed, “You’re gone!” The incident went viral and was the talk of not just the town, but the world over for days on end and this ‘what-just-happened’ moment is still talked about with shock and disbelief.

Tom Cruise was introduced to the Church of Scientology by his first wife Mimi Rogers. The actor went on to become one of the staunchest followers and advocates, promoting and supporting Scientology’s several programmes. And while his belief in the faith having a strong influence on his personal life – including his marriage and divorce – had always been speculated and spoken of, what drew public ire was his Scientology-afflicted criticism of psychiatry. In 2004, Tom made a controversial statement where he mentioned that “psychiatry should be outlawed.” The actor then faced severe backlash from the medical community who felt that the actor’s statements were furthering the social stigma that is associated with mental sickness, when in 2005 Tom criticised Hollywood actress Brooke Shields for using anti-depressants to deal with her post-partum depression. However, later in 2006, the actor apologised to the actress in person. Meanwhile, a leaked video of him promoting Scientology around the same time did not go down well with many of his fans. 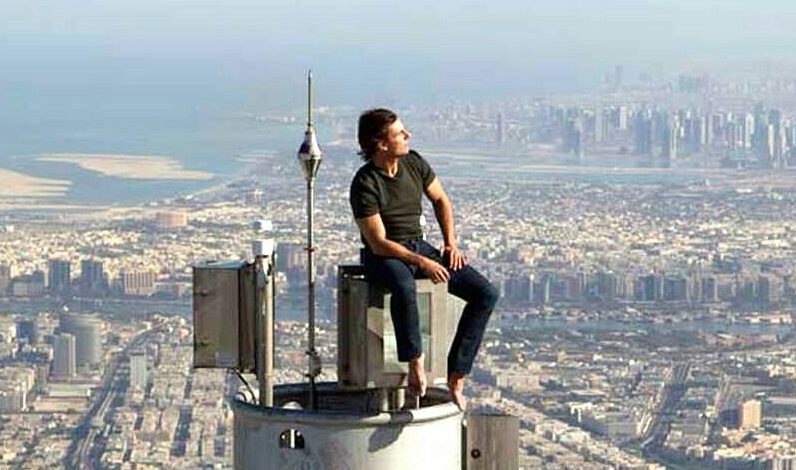 There were reports of Tom Cruise having etched graffiti on the spire of the Burj Khalifa in Dubai, while shooting for his spy action-thriller Mission Impossible: Ghost Protocol there in 2001. Reports suggested that the star – who plays agent Ethan Hunt in the hit franchise – inscribed a note for his then wife Katie Holmes and his children after the stunt shoot on the world’s tallest tower. The star is said to have marked the inscription with his signature and a heart symbol. Interestingly, the death-defying stunt in the movie wherein Tom’s character is shown suspended from the glass exterior of the tower is considered one of the best-ever action stunts performed in cinema.

The actor was first married to actress Mimi Rogers in 1987, but the two divorced in 1990. He soon married Hollywood star and his co-star in Days of Thunder (1990), Nicole Kidman in the same year. Their marriage lasted 11 years and the much-celebrated couple divorced in 2001. The couple also have two adopted children – Isabella Jane and Connor Antony. Post a much-publicised divorce, Tom was reportedly involved with his Vanilla Sky (2001) co-star Penelope Cruz, but the two split in 2004. A short-lived relationship with actress Nazanin Boniadi followed, which was allegedly on the insistence of Scientology leaders. In 2005, TomKat became all the rage, as Tom found love with actress Katie Holmes. The couple’s daughter Suri was born in 2006 and TomKat married later the same year. However, the two divorced in 2012.

While reigning at the Box Office, Tom Cruise has had his share of court litigations too. One of them even involved the use and control of his domain name tomcruise.com which was being claimed by a cybersquatter Jeff Burgar in 2006. The domain name was ultimately awarded to Cruise.