Days after the release of the Malayalam film Drishyam 2, sequel to the 2013 movie Drishyam, director Jeethu Joseph has announced the Telugu remake of the same. Venkitesh who played the lead in the Telugu version of part 1 – Drushyam – will reprise his role in the sequel.

Drushyam (Telugu) was directed by Sripriya. It featured Venkatesh, Meena and Nadhiya playing the respective roles of Mohanlal, Meena and Asha Sharath. 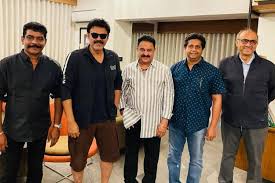 Venkitesh  shared pictures from the inauguration of Drishyam 2 in Telugu.

Dubai at the backdrop of this new edge-of-the-seat thriller 'Flight'. Click to know more!