India has always been my ek number, DMC tells Aakanksha Naval-Shetye about his fascination for the country

From wowing audience in LIVE shows across the globe to stunning viewers on TV and the OTT with hit series like Death by Magic, the world’s literally a stage for world-renowned magician Drummond Money-Coutts aka DMC who’s known to mesmerize crowds with his magic tricks. Ask him about it and he’s quick to share that the real magic lies in tickling the minds to bring out that childlike sense of amazement. We caught up with DMC on his trip to Dubai and in an exclusive interview with Aakanksha Naval-Shetye, the card specialist talks all about his fascination with magic, his karmic connection with India and also reveals why he doesn’t always confess to being a magician

It’s not every day that one gets to meet a magician and to be honest, I have never interviewed one before. The word magic and magician conjures all sorts of images. Hats, rabbits, wands, cards, robes, tricks… even witches, wizards and the world of Harry Potter. And though I have followed DMC and his intriguing series on Netflix, I find it hard to imagine what to expect even as I walk in for our scheduled meet. Looking dapper in a sharp suit, an unmissable vintage snake brooch, a bespectacled gentleman greets me with a warm smile and the three Hindi – hosla (courage), pyaar (love), vishwas (faith) tattooed on his bald pate confirm that he indeed is Drummond Money-Coutts – one of the world’s most famous magicians! 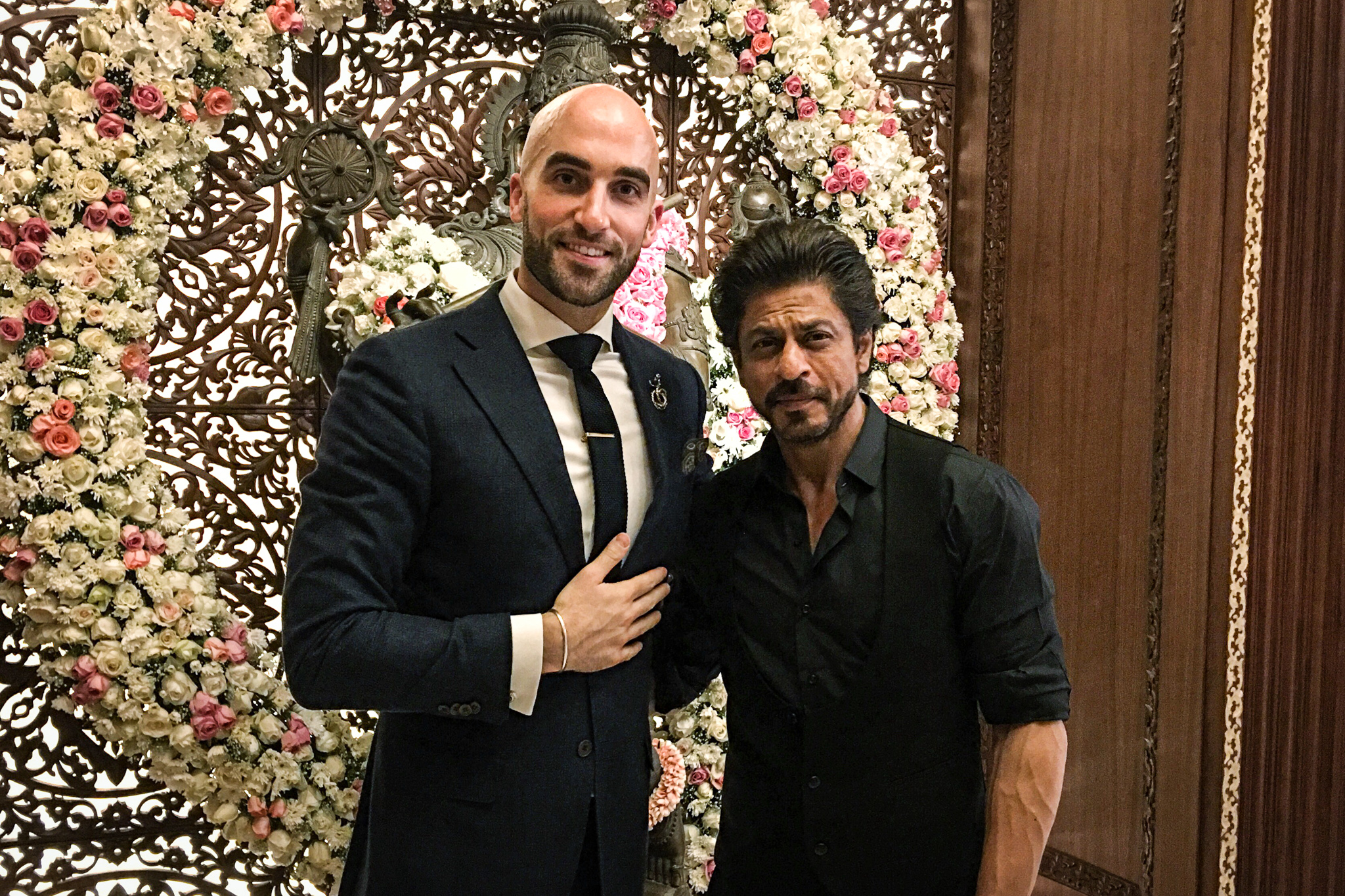 I start with the most obvious questions that had been high on my mind. Considering that magic is approached with so much skepticism and has so many different connotations, what is the first reaction he gets on saying that he’s a magician. Confirming the validity of the question, he says, “The trick is that a lot of times I don’t because I know the next few questions that will follow. So depending on the situation, I either confess to being a magician or I make up a far less interesting profile. So it’s not always that I do confess to being a magician.”

He continues, “It depends more on the location than anything else and the culture of the place I am at. Like in India it’s jaadu and there are jaadugars, PC Sircar is part of the culture here… so there’s a lot of warmth and acceptance towards magic. I would say there’s a lot more cynicism in the UK than a lot of other countries and people there like to challenge the magician.”

Admitting the initial apprehensions that some may have in believing in magic, DMC feels that most actually just would like to enjoy it. “There’s hardly anybody on the planet who doesn’t adore that childish sense of awe and wonder and astonishment. Almost everybody just wants to feel and enjoy that rush, enjoy that experience of magic.”

Belonging to London’s wealthy and renowned financial dynasty of Coutts & Co that his family has headed for decades, what made him delve into magic as a profession? “Literally underneath the vaults of the Bank that my father headed, there was the oldest magic shop in the UK which is more than a 100 years old and run by the 4th generation of the same family. When I was eight, my father took me there, and I was just so amazed. That’s how it all started.” He adds that while he had always been fascinated with life’s great mysteries, he suddenly discovered this world of magic as a performance art. “I bought a deck of cards and I started learning card magic. It gave me such a powerful sense of astonishment, I discovered that I could hand that same feeling to other people. My family are all bankers. I was studying to become one too and even started working after college. But I realized I could make more money with my private shows than I did there. It was quite a transitional moment for all of us. So by the time I left university, I went full time into the London scene successfully and then to Los Angeles and having the highest budget production of magic show ever made.” 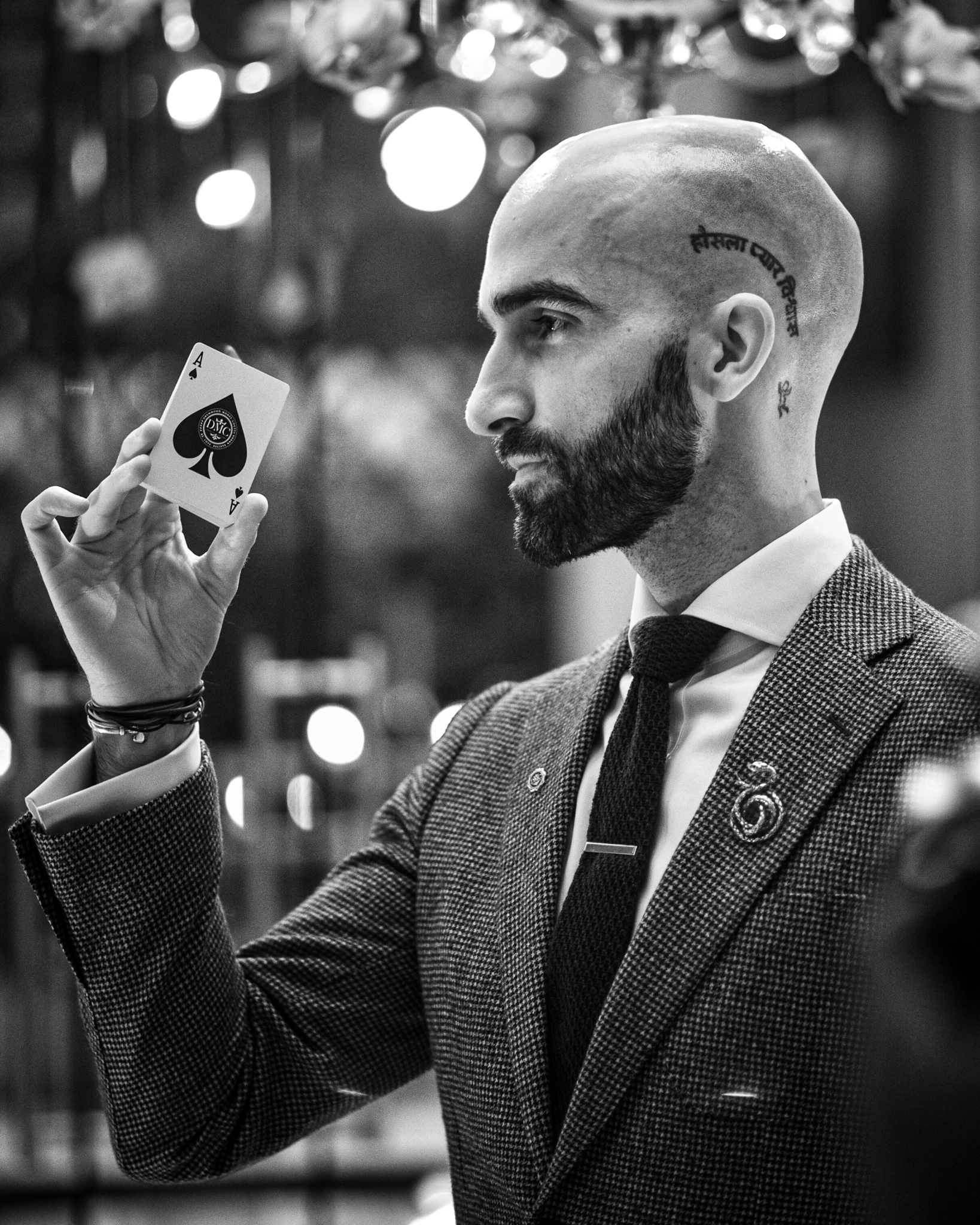 Drummond shares a strong karmic connection with India. A love that was first felt by his grandmother who visited India in the 1960s. A love that was rooted deeper in him. In fact, his belief he’s tattooed are Hindi words. “I remember landing in Delhi after being in the pristine glass and steel office for six months back in London and suddenly it is this beautiful chaos, the food, energy, the people… It was like stepping into one of the romantic novels of India and that love has only gotten stronger. In fact, my dream is to base myself in Mumbai. India has always been my ek number. It’s one of my favourite places, so I would like to be based there, but very much coming to gulf region.”

What makes DMC unique from others his kind is his approach to story-telling. “I think many magicians are fixated on the idea of fooling someone and that’s where it stops for me. Magic has always been a vehicle for something that emotionally resonates with you or has a narrative or a purpose to it, and not just something that baffles you. It’s like a piece of music that sounds good, but then there is music that touches you in some way and the lyrics move you. And I have always aspired to create magic that does that. I love it when someone truly adores magic, and that’s the greatest thing. Seeing that childlike hunger for the experience of magic that tickles a part of their mind, that’s the real magic.”

Ask him if people always expect him to pull out rabbits out of a hat or make watches and rings disappear and what about associating magic with witches and wizards? “The anthropological interpretations of magic varies vividly across the world. In the West we have diluted magic to this trickster someone who does card tricks. Here in parts of Middle East and India and Central America and Africa, magic has much deeper connotations. So, as a performer, one has to be sensitive with the approach to the word magic. I want to dive deep into the interpretations of magic. Some of these are very positive, but some can be destructive and negative. Like parts of Africa has like witchcraft as magic. So, I try to travel as much as possible to both experience and perform magic.”

“People have always sought to expose magic for its fundamental powers. But for me that is one part of the experience. Even if someone thinks they know what I am doing it becomes irrelevant to me as it’s just a tiny part of it. So it’s good to have people challenging me and then me wowing them. That’s the experience of magic.”

He adds, “Nobody cares about the secrets of magic, it is the experience that is magical. It’s like guarding an empty box. People want to know about it, but once you stop holding on to that, it’s not going to concern them.”

“I liked Hrithik Roshan in Guzaarish,” he says talking about the portrayal. He’s also performed for Amitabh Bachchan, who incidentally had played a magician in Jaadugar.  “He has a curious, and a sharp mind,” says DMC.

“I believe there’s far more magic in the world and within ourselves than any work of the magician.” From turning skeptics into believers, Drummond reveals that the greatest joy is to see people embrace magic that they were challenging minutes ago. “It’s like I need new haters because all old ones have become fans,” he smiles.

Explaining what magic truly is, he says it’s an ever shifting Rubik’s cube. “The dimensions, the interpretations are always changing. A kid in Disneyland and a monk in the Himalayas will approach it differently. It changes geographically, culturally, historically, and then there’s the universal magic of kindness, of the human spirit and so many elements of the human mind that lie beyond the magic tricks. It’s like love. Each will have a valid interpretation and definition formed by experience. Magic means everything and nothing, it’s not tangible. It’s a powerful stirring and emotional sensation that one can feel. From the birth of a child to a beautiful sunset or a poetry or a trick. It’s not what magic is, but what magic does that makes it real and makes it beautiful. It’s a personal journey. Like Roald Dahl says, “Those who don’t believe in magic will never find it.”

Welcome 2022 in style: Check out the Best New Year deals in Dubai!