The sky-blue Mauritian sea and the sandy beaches swim into memory when you think of Shilpa Shirodkar and her sizzling song with Govinda Sanam mere Sanam from Hum (1998). But the voice on the other end is giggling when I say it. Curious I go to meet the low profile Shilpa Shirodkar who lives in Dubai only to be enveloped by her warm, chatty personality that is beautiful, encompassing and endearing. She tells me that she only took the second dose of the vaccine and her Instagram post went viral. She apparently became the first Bollywood actor to have taken the vaccine and that made big news. “What my 60 films didn’t do, this one post did,” she giggles. What ensued was a chat-a-thon that meandered from family matters, to her arranged marriage, her teenaged daughter to her 60 odd films and Bollywood! And the laughter.. Excerpts from my chat! 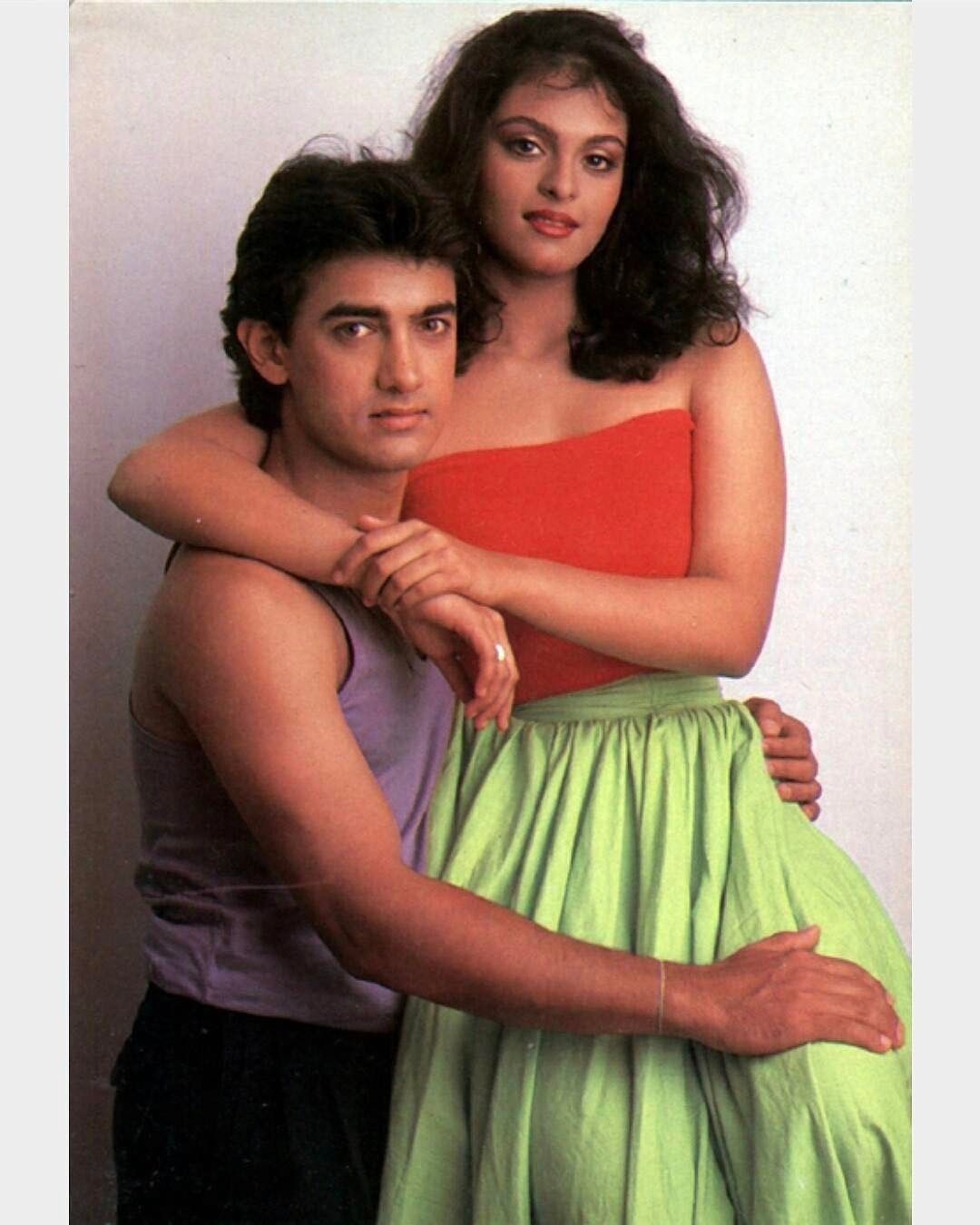 You started out very early. Tell us about that phase, fame and being surrounded by glamour?

I come from a regular Marathi speaking family and my brush with fame was a new feeling for me. Being chauffeured around, pampered and loved was great but my mother ensured that I was treated normally at home. Bhrashtachar my first film released in 1990 and then roles started pouring in. I was earlier going to be launched in Souten ki Beti by Saawan Kumar Tak and by Boney Kapoor in a Jungle. While I was dropped from the first film, the second one was shelved. They almost wrote me off saying I was bad luck but I went on to do about 60 films. 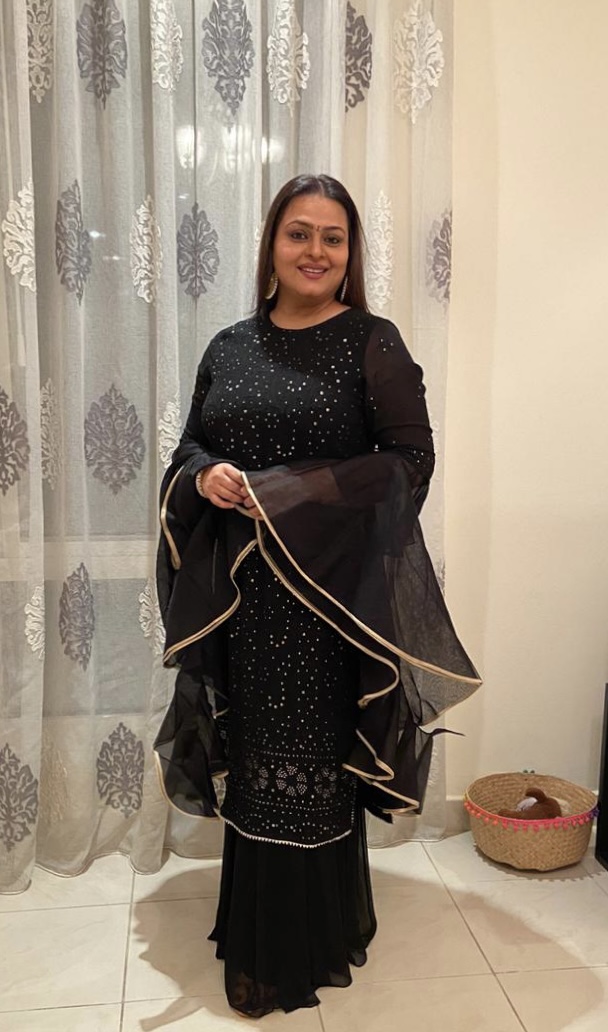 The highlights of your career and memories with your co-stars?

My mother used to model for extra income and knew Gautam Rajadhyaksha, the well-known photographer. She took me along for a shoot and I went to his house where Pandhari dada did my make-up and Victor did my hair (he is an ace wig-maker). One day Victor who went jogging at Juhu beach met Rikkuji who was Madhuri Dixit and Anil Kapoor’s manager. Boney Kapoor was looking to cast a girl opposite Sanjay Kapoor in Prem and Rikkuji suggested my name. I went to meet the family and I remember Arjun Kapoor as a chubby child and was finalized but the film was shelved. Rikkuji however kept finding roles for me and I got Bhrashtachar that had Rekhajee, Mithun da and Ramesh Sippy.  Mithunda was very helpful to me in my career.  Also, Anil Kapoor took my photo album to the South and I bagged a big Telugu film. That was how the industry was in those days. I am ever so grateful to them. Jackie Shroff was nice, friendly and loving and there has been mutual respect over the years. Chi Chi (Govinda) is one of the best actors and dancers in the industry, was so sweet to me. He never had a problem with several retakes and rehearsals during the dance numbers. 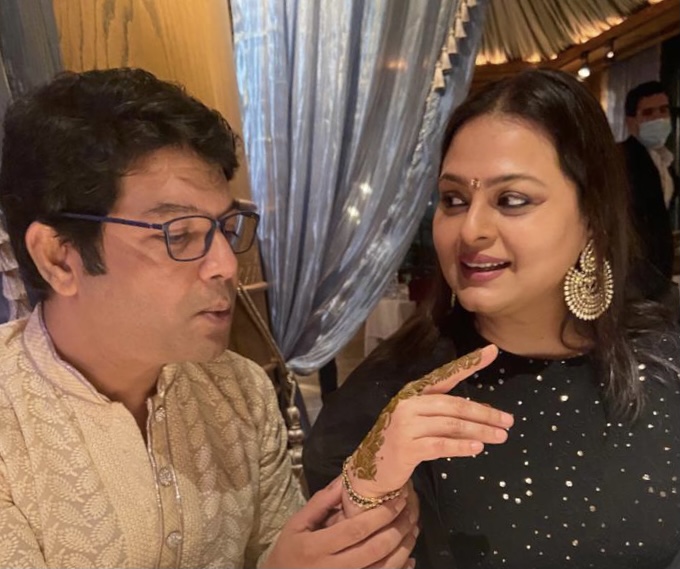 You had an arranged marriage. Tell us about your banker husband?

It has been 20 years but seems like yesterday. I married Aparesh on the 9th of July 2000. I married him when he was a student and my mother met him and found him perfect for me. He was a student and pursuing Masters in the Netherlands and we married and I joined him. It was a whole new world for me. I had only watched Superman films and Sleeping with the Enemy – and not exposed to western cinema at all. My uncle suggested that I watch the BBC news to improve my English. But here I was in a Dutch speaking country trying to buy groceries by looking at the pictures on products. But people were very kind. My husband taught me three magical words – “Please, sorry and thank you.” Believe me I never used them earlier. But I realise how it peps up someone’s day when you are polite.

Your camaraderie with your contemporaries including Madhuri Dixit and Juhi Chawla?

I did three films with Madhuri Dixit who I call MD and two with Juhi Chawla. MD was like a big sister. She has been extremely caring and guided me very well. We were in touch post our weddings too since both of us had left our families and settled abroad. Our struggles there kept us together and we discussed so many things. We haven’t been in touch after she moved to India. Our children were in the same school when I was there and her kids and Ram are lovely people. 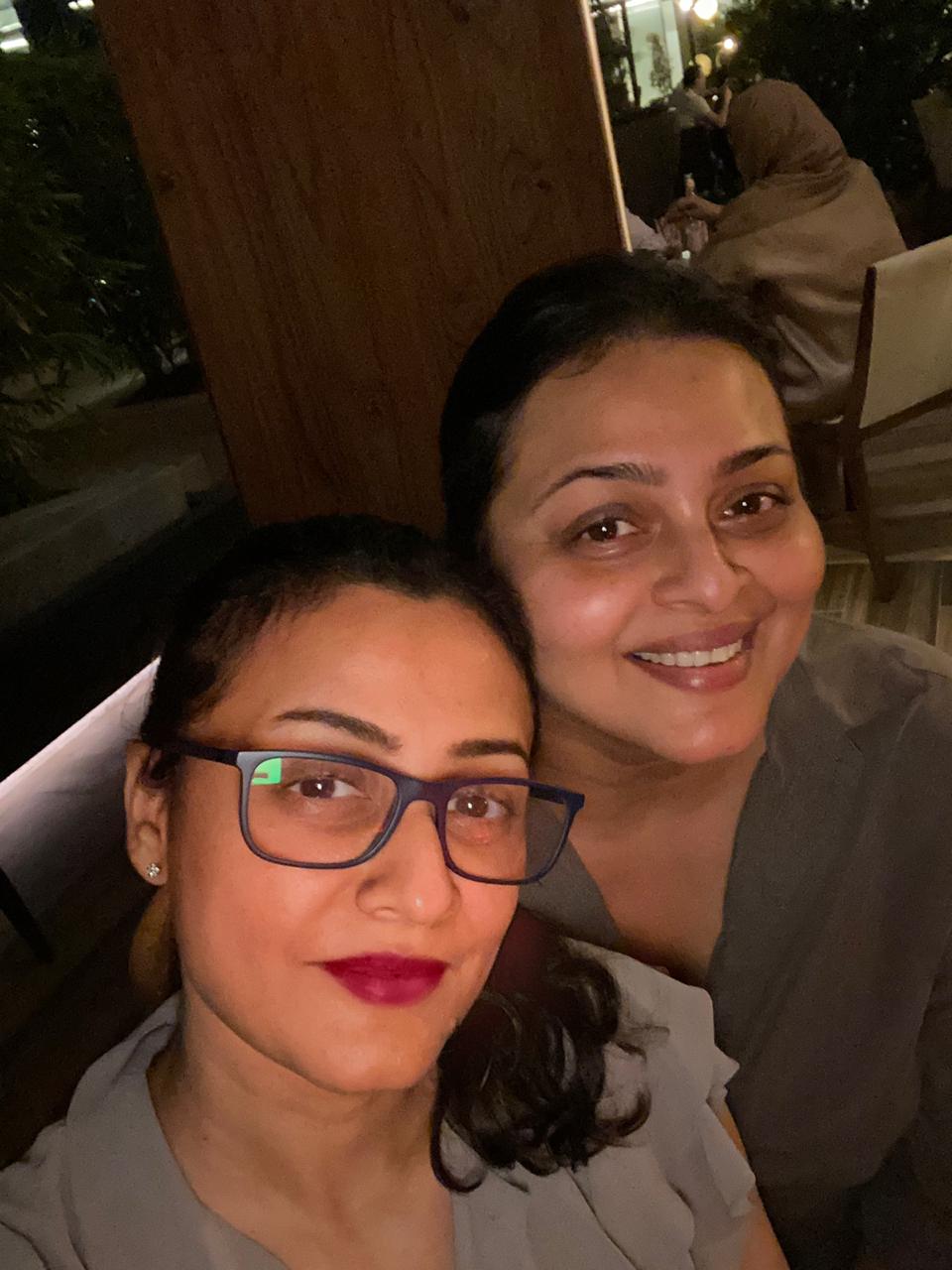 Tell us about sibling love and your sister Namrata Shirodkar?

Namrata is three years older to me and very different than I am. She was academically inclined and I was not. We have never fought and today we are closer than ever. She often tells me that I am the only blood she has since we lost both our parents. She voices her opinion loud and clear and for her right is right and wrong is wrong. I had a wonderful time with her when she was in Dubai when her husband Mahesh Babu was here for a shoot. We share a relationship that is very special, dear and close! 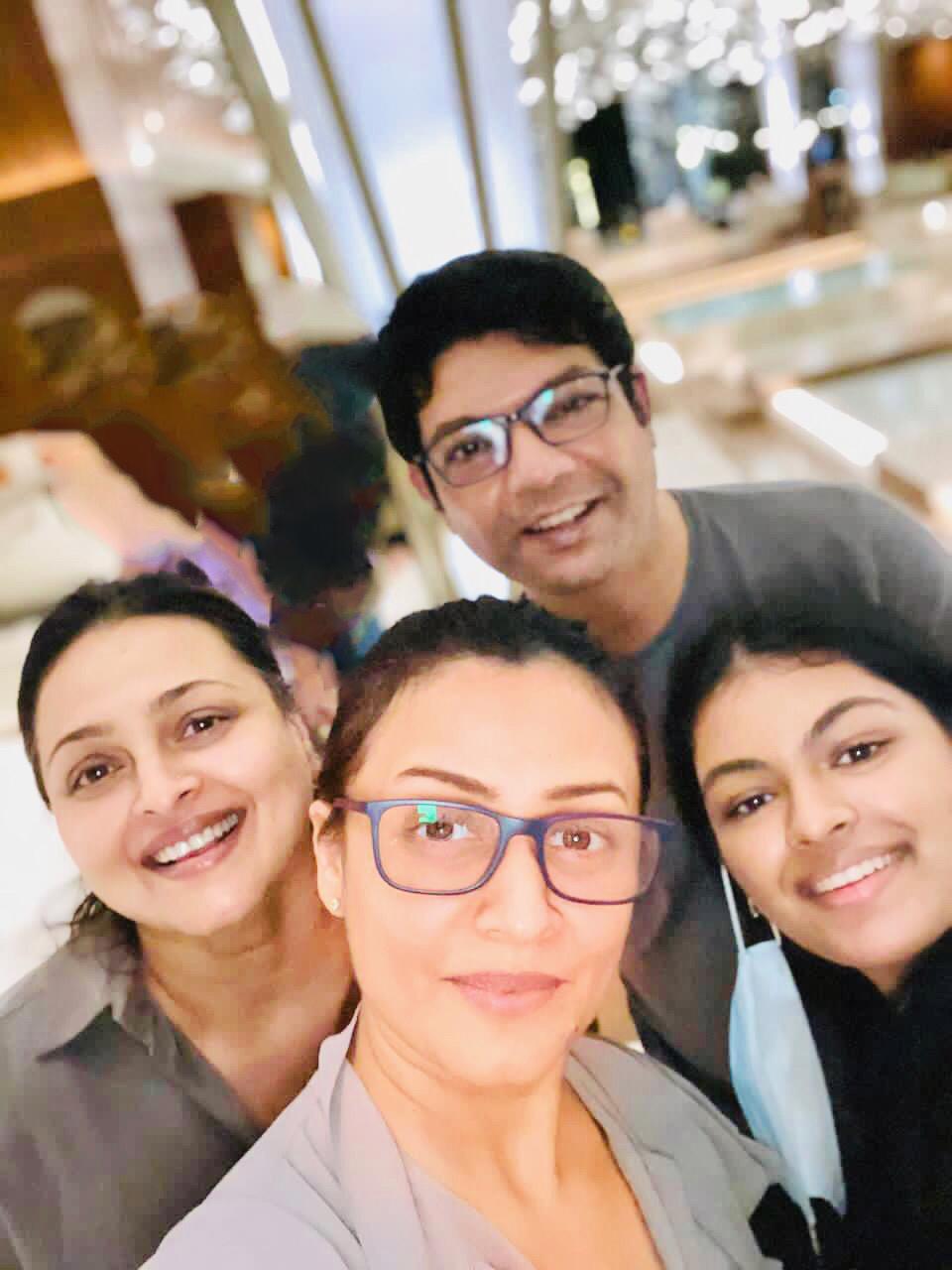 How was life abroad?

We had a budget of 2000 gilders and spent 1000 on rent and electricity. So, we had a spare of 1000 and learnt to be very careful. My husband had a dear friend and her husband was working in a big company in Rotterdam. She was like a teacher to me – she gave me a bag full of cleaning material and detergents etc – that way a lot of chunk got saved. I would give missed calls and she would call back so that I don’t spend on phone calls. Every Saturday was a flea market and I could buy 5 kgs. of chicken at a low cost. I would clean and freeze it for the whole week. One year we survived on chicken curry and rice.  Then the global recession hit and we moved to New Zealand but it was tough for him to get a job.  I did a 9-month diploma in hair dressing and got a job as an intern in a salon. I was assistant to the main stylist an had to sweep the floor, sanitize the towels, keep work stations clean etc.  But my husband and I could never meet because my work was on weekends and he worked weekdays. I quit the job and asked my husband to create a CV for me including my qualifications – I failed in my 10th grade and that was mentioned too. I floated the CV and got two calls. I dressed up suited and booted and went for the interview. It was like I was in the movies. I bagged both jobs in credit control. My husband was amused but I just enjoyed what I did. Then my husband got a position with Barclays in London and we moved there. My daughter was born in New Zealand and we had to move again. I had the luxury of a house help and started to drive though I lacked company. In 2007 my dad was diagnosed with cancer and I rushed back to India. He passed away and then my mom the next year. My husband has stood by me through thick and thin. 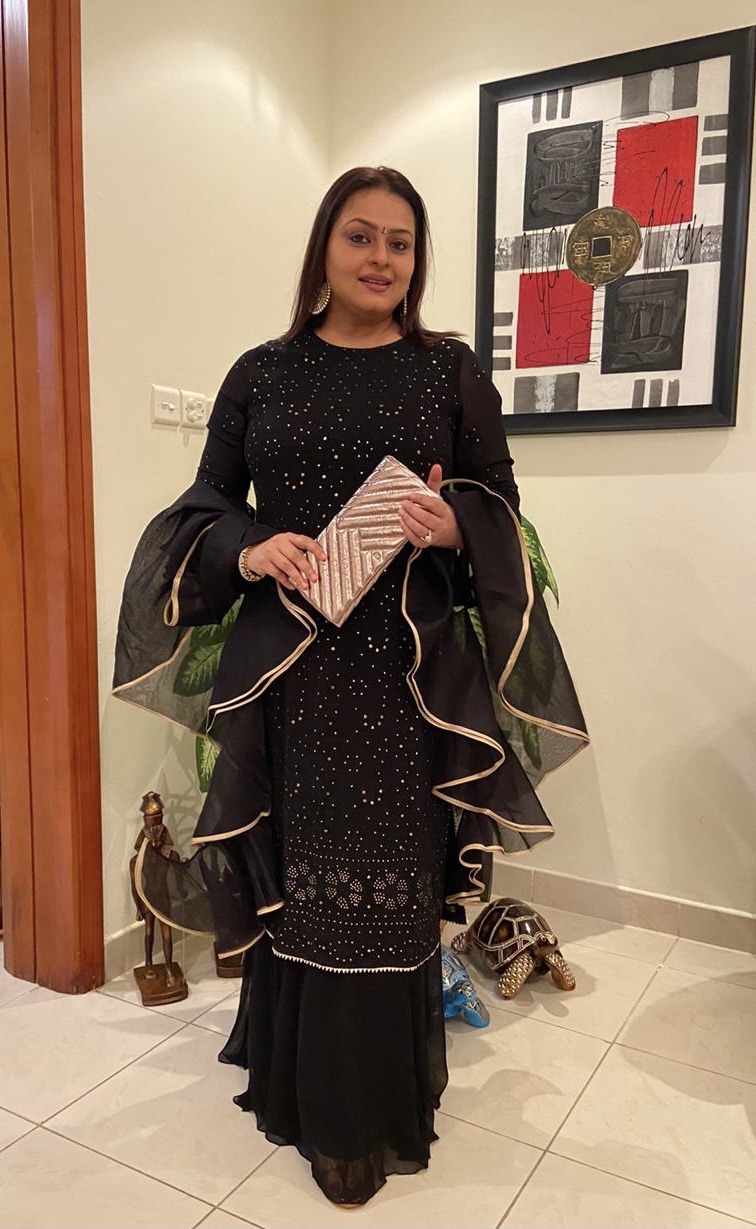 When did you move to Dubai and what plans ahead?

I moved here two years ago and I have found home! I love the place. Who doesn’t want to work. I would love to be part of web-series since they have so many roles for all kinds of actors. But I never plan… let it happen the way it is meant to.

Elli AvrRam paints a tribute to all nurses on World Nurse Day!