Well-known fashion designer Virgil Abloh has died at the age of 41 after a long battle with cancer. Virgil Abloh was the founder of the fashion label Off-White and the menswear artistic director at Louis Vuitton. He died on Sunday. 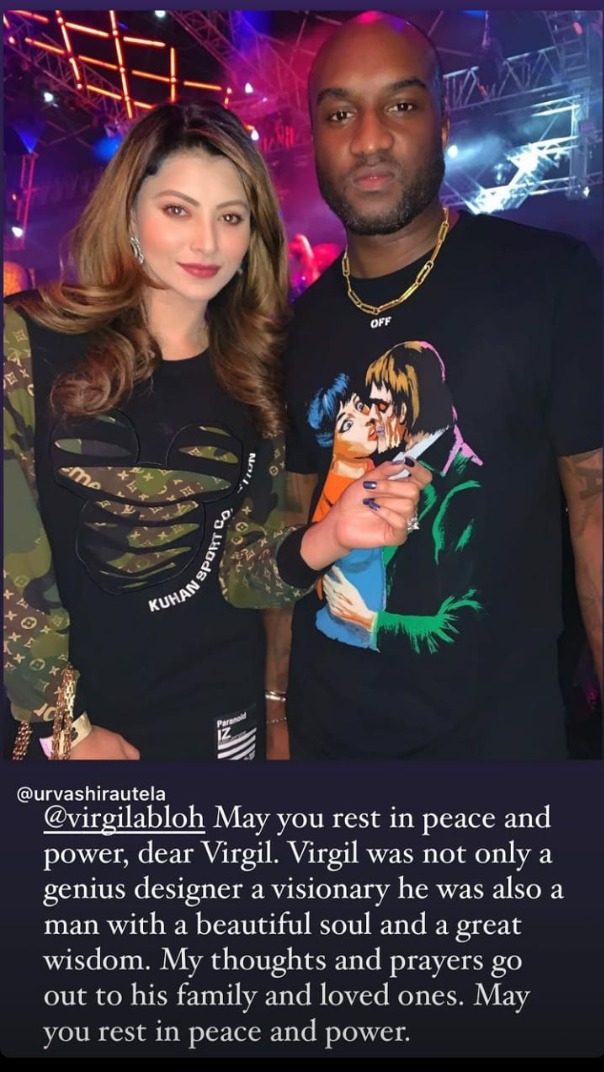 His death was verified on social media by his labels, In 2019, he was diagnosed with cardiac angiosarcoma, a rare and aggressive malignancy. Everyone was taken aback by his unexpected death.

Even the Bollywood celebs like Karan Johar, Priyanka Chopra and Urvashi Rautela who knew him personally are in shock after the demise of the ace designer. Urvashi Rautela who is in Ukraine for the shoot of her upcoming action film has paid her condolence to the designer. Urvashi Rautela posted, “Virgil Abloh may you rest in peace and power, dear a visionary he was also a man with a beautiful soul and a great wisdom. My thoughts and prayers go out to his family and loved ones. May you rest in peace and power. ”

On the work-front, Urvashi Rautela will play Poonam Mishra, the real-life wife of Inspector Avinash Mishra, represented by Randeep Hooda in Inspector Avinash. Urvashi will also appear in a few more south Indian films, including the Telugu film Black Rose, in which she will play the sole lead role, and a 200 crore Tamil blockbuster with Saravana. The next schedule for the film is slated to begin soon.

Spider-Man: No Way Home to now release on December 16

0
Aakanksha Naval-Shetye November 29, 2021
No Comments Yet

‘You can’t define me’: says Ranveer Singh on breaking all stereotypes!