Jai Shankar, Dubai based businessman and MD, Project and Equipment Supplier Ltd FZE and artiste, who, the late Dilip saab personally flew to Dubai and settled in employment, remembers the father- figure in his life and the legendary Hindi cinema thespian who passed away recently!

It all started when I was doing my Masters with Economics in Chennai, at Madras Christian College. My brother in law had a leather manufacturing firm and sent me to Singapore for looking after the office there. I chanced an opportunity with Singapore Television and became a known TV star singing Bollywood songs. That is when I met actor Krishnam Raju, (who is actor Prabhas’ uncle), and we became good friends. He offered me a job opportunity in Hyderabad in 1984 and I decided to give it a try. He was making the Hindi version of popular Telugu movie Bobbili Brahmana, titled Dharmadhikari, with a multiple star cast that included Dilip Kumar, Jeetendra, Sridevi, Shakti Kapoor and assigned me the task of looking after Yusuf Saab (Dilip Kumar) since I could speak Hindi fluently. 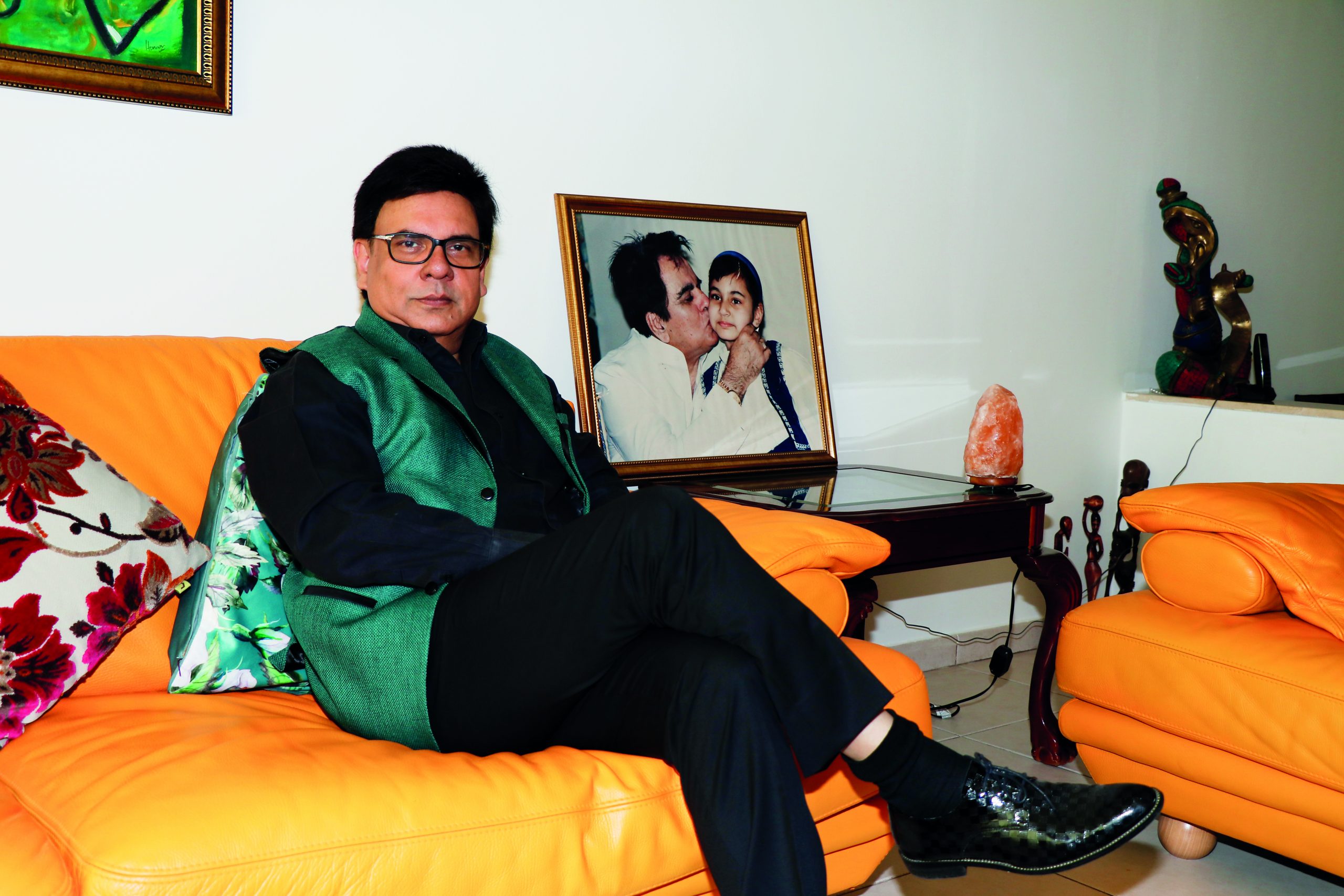 I went to the Rajahmundry railway station to receive Yusuf Saab at 3:35 am and the train there stops exactly at one and a half minutes. I used my clout with the station master and got him to get all 20 coolies to the station at that time. I’ll never forget the vision in white who stepped out of the train – Yusuf Saab in a pure starched white outfit, looking sleepy but immaculately dressed. Within less than two minutes the luggage was huddled into a van and I sat on the front seat of the ambassador with him and Saira jee at the back heading towards the producer’s bungalow where he was to stay. As I was leaving, he asked me where I was going and I told him I was going back to my hotel room. He insisted I move bag and baggage to the next room in the bungalow and stay with him through the shoot. That was the beginning of a beautiful mentorship and friendship with the legend. 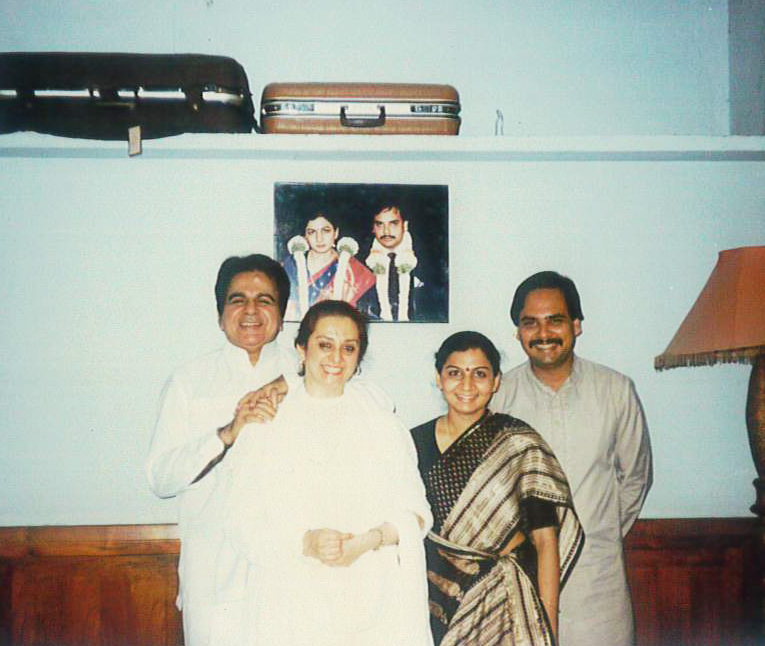 During the schedule of the shoot, I requested a few hours off from him since I wanted to visit the holy shrine of Tirupati. He, at once, asked me “Akele Jaoge?” (Will you go alone?) and came along with me. As we were driving, I narrated to him the story of the temple and its deity and we had to pass through a deer park enroute and he spotted a deer. When we reached the place, I was apprehensive because some Hindu shrines are particular about not allowing non-Hindus to enter the place. But as luck favoured us, the man who would later be the president of India, Dr Shankar Dayal Sharma was visiting the place and happened to be a big fan of Dilip Saab. So, we could enter the sanctum sanctorum and spend half an hour in front of the main deity. “For half an hour Dilip Saab stood in front of the Balaji idol with his eyes closed when the offering and puja was being made. We were looking at him praying fervently. He even signed on the guest register. Later on, he told me that when I was narrating the story of the lord to him, he had decided that if he saw a deer in the sanctuary, he would believe me. And he had spotted a deer. “ 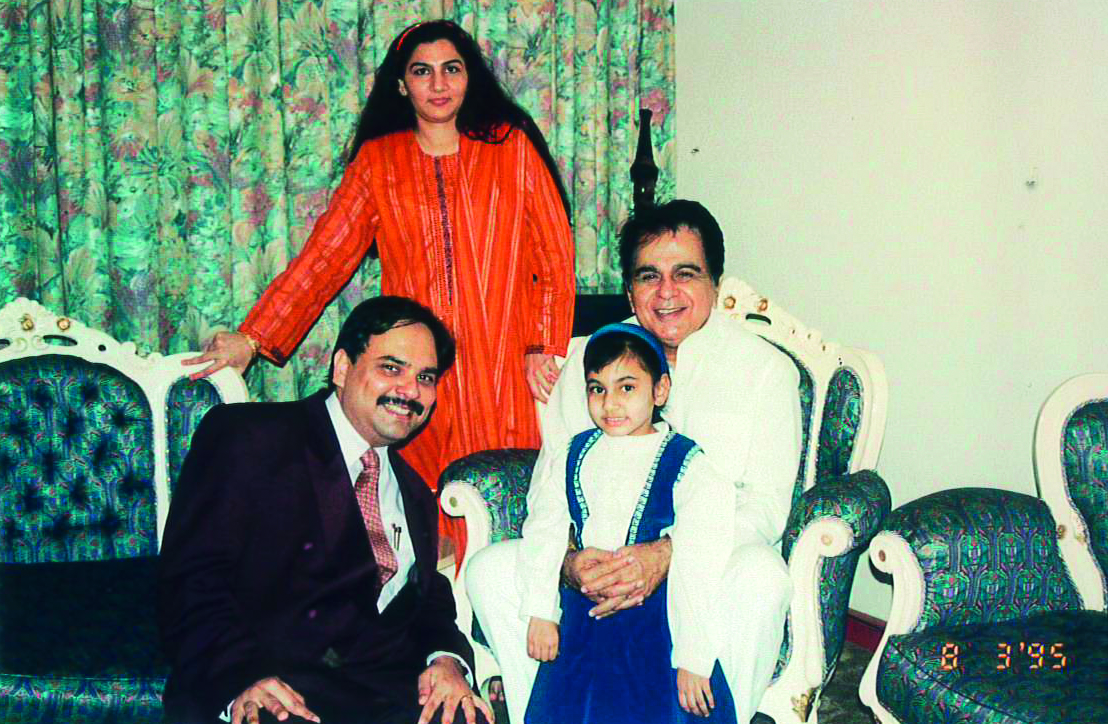 I am used to recite the Shiva tandava stotram (a hymn) daily and he used to watch me do it. In the film Dharmadhikari, there was a scene where he narrates the hymn and told the director of the film Shri Raghavendra that I would assist him in that scene. The whole unit watched us create the scene. That was his aura, his command over his craft. At another instance, Jeetendra challenged me to a bet. There was an early morning shoot the coming day and it required the entire star cast to be there at an outdoor location early in the morning. Yusuf saab would usually be on set by 11 am and Jeetendra challenged me that he would not be there. In our morning walk that very day at 5 am, I requested Dilip Saab if he could report to the shoot early that day and he agreed. Everyone in the unit was shocked. But that is what he did for me!

The legend commanded respect wherever he went. Once we went to the Chola Sheraton to book a suite and were told that it was already booked by Rajesh Khanna. Then we went to the Taj and booked a suite next to where his dear friend Raj Kapoor was staying. We checked in and the manager called me to tell me that we had to move from there because Mr Amitabh Bachchan had already booked the place. When Amitabh got to know that Dilip saab was inconvenienced, he came personally and fell at his feet and asked him for forgiveness. That is the respect he commanded. Another great quality he had was to always pay his own bills, be it his trunk call bills or bills incurred on personal expenses. 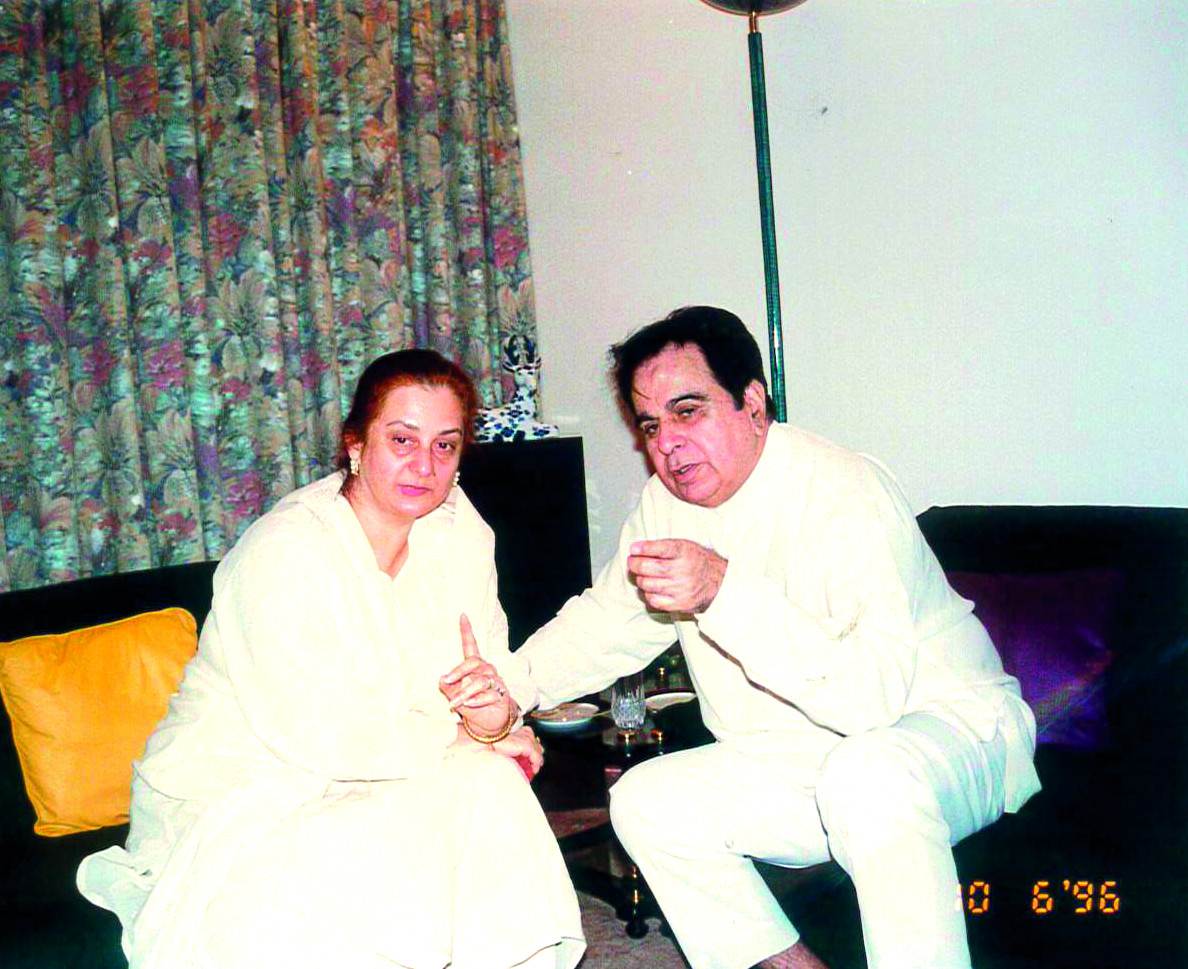 My life’s turning point however came when the legend agreed to come home for a meal of idlis and dosas. I was married by then and the time for lunch was set. What I didn’t know was that my employer was flying in to Chennai the very time for a lunch he had invited Yusuf saab for, at the Taj. “When Krishnam Raju called Dilip saab, he said he wouldn’t make it there because he was going to my house for a meal.” He came home and enjoyed a simple meal we made. Next day I met Krishnam Raju for a drink and he was triggered by a comment by one of his subordinates that Dilip Kumar had refused to come to the producer’s house but went to my home. Krishnam Raju started abusing me stating that I was a mere employee and that Dilip Saab came to my house only because of him, being the producer, he was. I even when I kept pleading that I didn’t know or else I wouldn’t have allowed it. The argument went on to a crescendo and finally I told Mr Raju that I would like to be his friend not employee. I didn’t go to work the next day onwards. 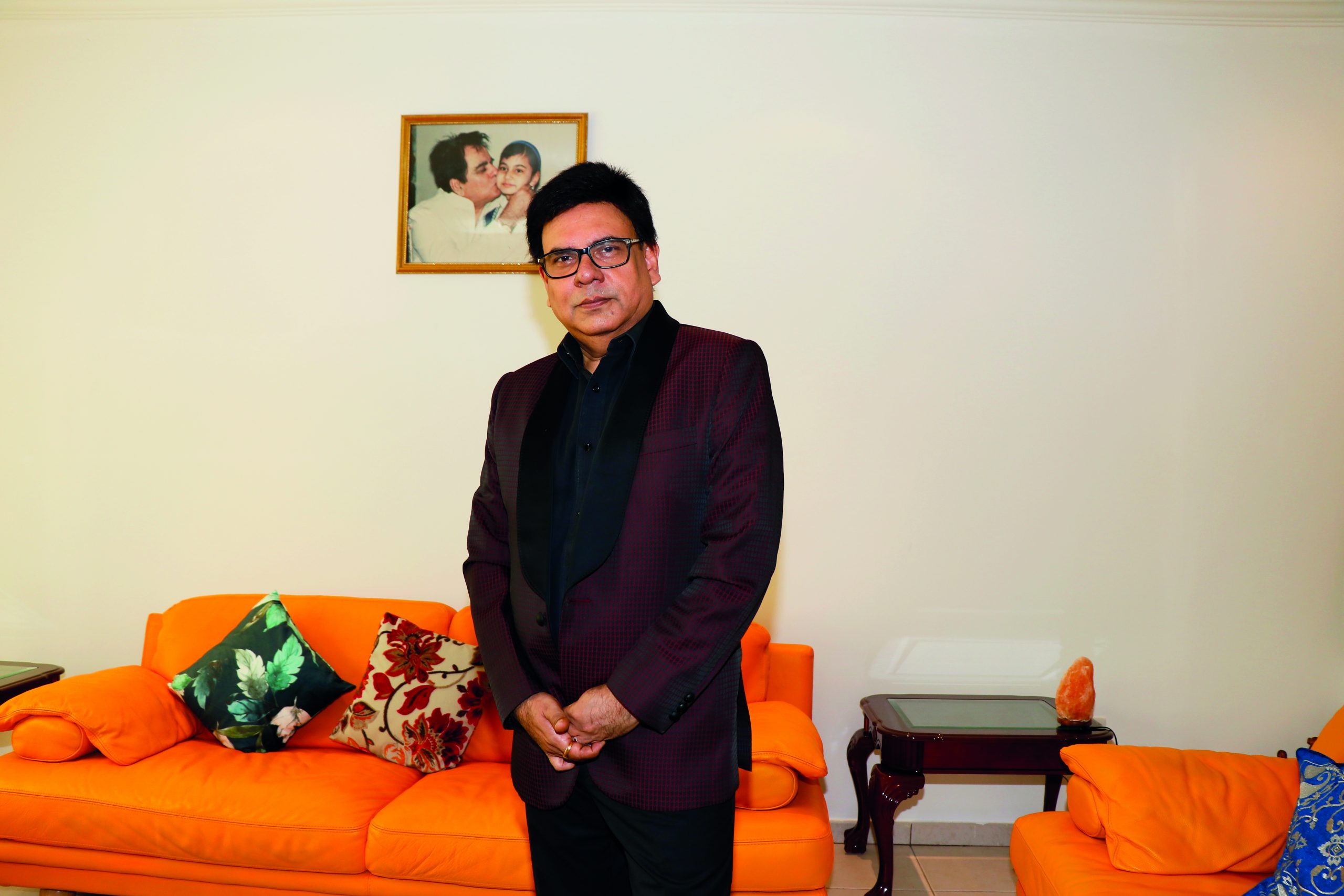 Yusuf Saab got to know what had happened because he kept calling the office for me and couldn’t reach me. That is when he asked me to send him my passport through FAX. Next morning, he called and told me to come to Mumbai and asked me if I would go to Dubai to work. I agreed. The plan was to meet his friend Gopal who was a successful businessman, who wanted to open an office in Dubai and Yusuf Saab had recommended my name. His friend would fly in from London to Dubai to meet me and him. He arranged my visa and told me that I would be away from my family and spoke to my wife too.

The beauty is that he came with me to Dubai, we stayed at the Hyatt. He had a suite, I had a room and the next morning I was to meet Gopal saab. I landed the job and my office was at the Ramada roundabout – with Salim Sharifi as my sponsor. That is why my journey in Dubai began.  Years later, I started my own business and have continued living in this city. Dilip Saab and Saira jee used to visit us several time and stayed at home. They were very close to my children who were born later and since then has been part of my family. I couldn’t meet him for the last few years since he wasn’t well but the news of his death has shattered me and I am devastated. It seems like I have lost a parent.

Marvel drops intriguing teaser for "What if...?"