South star Nithiin and Keerthy Suresh starrer Rang De is gearing up for release on March 26. And a pre-release grand event saw the two stars being praised by renowned director Trivikram Srinivas, who graced the event as the special guest. Written and directed by Venky Atluri, the film has been produced by Suryadevara Naga Vamsi under Sithara Entertainments banner. 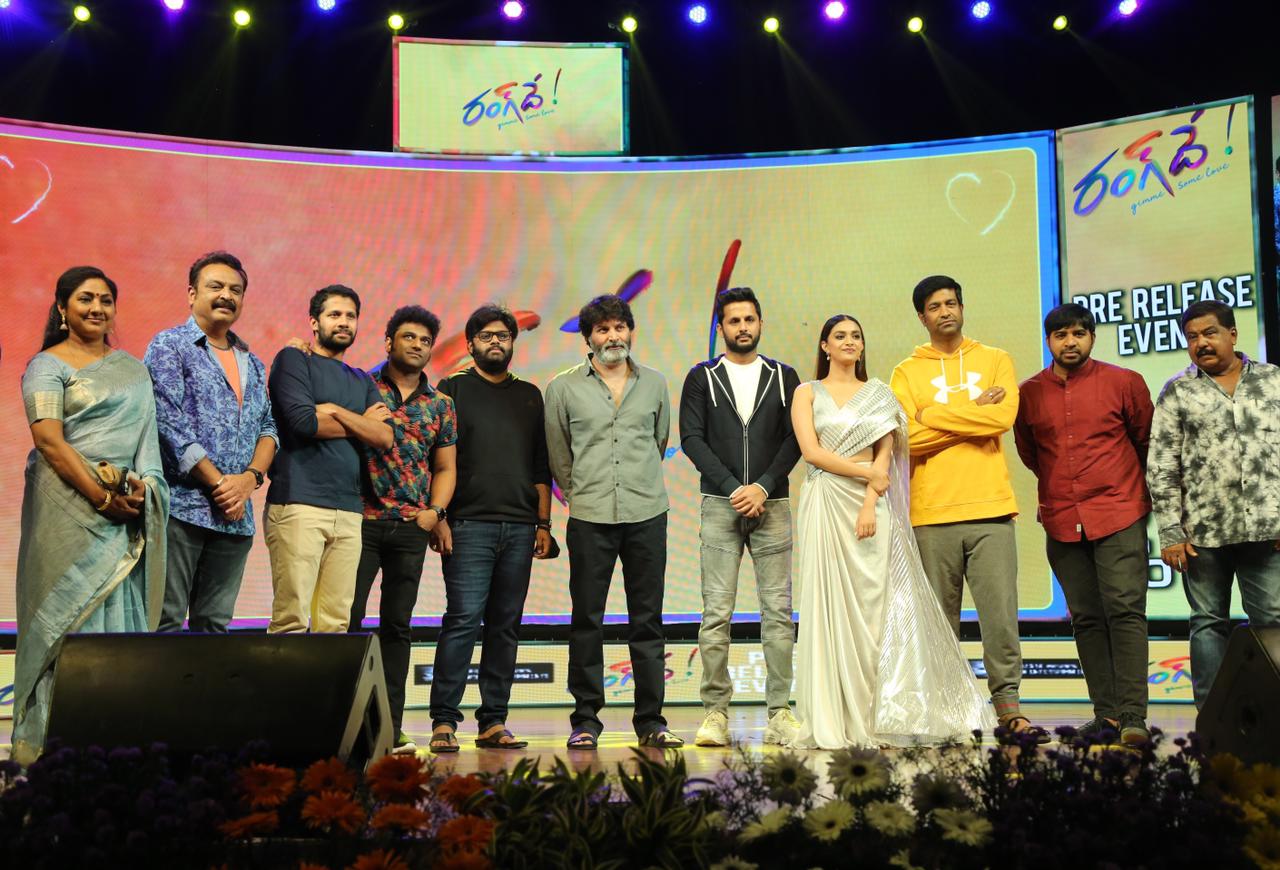 Nithiin said, “In this film my age is 24, but my actual age is 36. I was in doubt but when I heard that PC Sreeram is doing the cinematography, I gained confidence and courage. Happy to be working with him after Ishq. DSP gave fantastic music and all the songs released so far have garnered superb response. Keerthy always reminds of Mahanati but in this film she is too naughty. She is a big asset for this film. I know director Venky for the past 11 years yet it took long for us to work together. This is a sensible subject and was handled well. Rang De is my third film in Sithara Entertainments banner. Whenever I score a flop, this banner gives me the much needed success. If reckoned as sentiment, Rang De will definitely score a hit. In the industry, Pawan Kalyan and Trivikram are my pillars of support. They are my strength.”

“Keerthy always reminds of Mahanati but in this film she is too naughty.” – Nithiin

Speaking on the occasion, Trivikram said, “Humans are the only living beings who can smile and see all the colours. We are the lucky ones and Rang De will be like a rainbow. I’ve watched the film and I really liked it. Nithiin is like my brother and I always wish him success. Nithiin and Keerthy are playing Arjun and Anu respectively which is indirectly A.. Aa. Devi Sri Prasad is one of my favourite music composers and I’ve immense respect for musicians who have classical background. There is a particular song in this movie ‘Oorantha Cheekati’ and it will certainly make the audiences weep in the theatres.”

Actress Keerthy Suresh said, “I thank the director and producers for believing in me that I can do the role of Anu. This is my third film in Devi Sri Prasad’s musical and I hope we score a hat-trick. The chemistry between me and Nithiin in Rang De worked out quite well.”

Director Venky said, “I never imagined that Nithiin and Keerthy would accept this film. They breathed life in the roles of Arjun and Anu. Now we three have become best friends. The support I received from the producers during the lockdown period is unforgettable one. I met DSP as a fan but he gave me extraordinary music. It’s a blessing for this film to have legendary PC Sreeram and to all the artists and technicians, I thank you. Last but not least, director Trivikram’s encouraging words after watching Rang De relieved me.”

Actor Naresh said, “I received hundreds of messages after the trailer was launched. This shows the response to the trailer and Venky has handled the film efficiently. ‘Rang De’ is a cocktail of emotions, entertainment and romance. None can fit in the role of Arjun except Nithiin and Keerthy is pride of South Indian cinema.”

Mammootty’s much-awaited One set to release on THIS date