“Urvashi Rautela is not just the first, but also the second most beautiful woman in the world,” says the international singer

Urvashi Rautela has gone global again! The actress who wowed international audience collaborating with Arab superstar Mohamed Ramadan for the song ‘Versace Baby’ last year, has now bagged another global collaboration. This time with ‘Jalebi Baby’ singer, Jason Derulo and Urvashi even shared a glimpse of it on her social media. 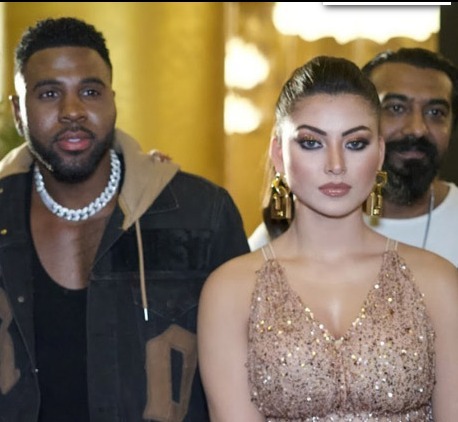 On working with Urvashi, Jason Derulo said, “It was a pleasure working with Urvashi Rautela in ‘Jaanu’. She’s a shining example of raw Indian beauty, and more importantly, Urvashi Rautela is not just the first, but also the second most beautiful woman in the world. She is an excellent and outstanding actor and performer. She is the ultimate global icon. The only Bollywood film person I know of after Shah Rukh Khan is Urvashi Rautela She is very famous. I cannot comment on the industry, but I like the emotions and dance that Indian movies involve.”

The actress recently walked the ramp at the Lakme Fashion Week for ace designers. She was also a judge at the Miss Universe Pageant 2021. In Bollywood, Urvashi will be seen in the Jio Studios web-series Inspector Avinash opposite Randeep Hooda. Then she has the bilingual thriller Black Rose, along with the Hindi remake of Thiruttu Payale 2. Apart from that the actress will be making her Tamil debut with the 200 crores big-budget film The Legend opposite Saravana.

Check out the Euphoric Nudes Festival Palette introduced by Nudestix!